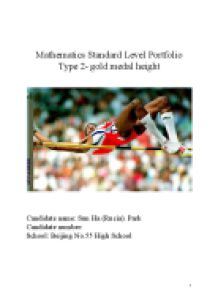 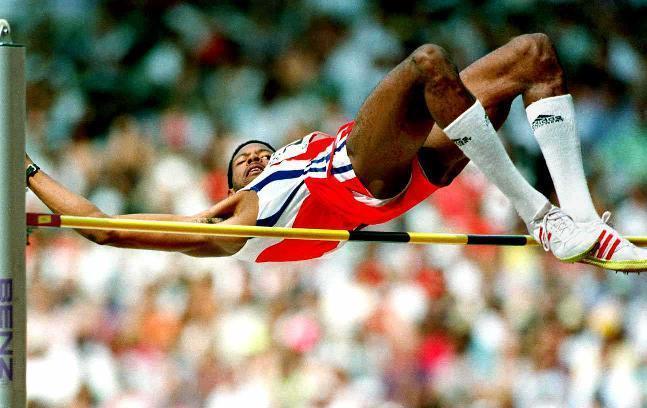 Olympic Game is a variety competition of various athletics. It is composed twice a year, summer and winter, and it is hold once four year. Because there are many athletics competitions, it’s a great opportunity to take numerical data. In this task, I will investigate the winning height for the men’s high jump in the Olympic Games.The high jump is a track and field athletics plays in which athletes jump over a horizontal bar placed at measured heights without any aid of certain devices.

I m going to use Microsoft Excel and the graphing calculator TI-84 to collect and present the data for analysis and investigation, and find out the best –fit functional curve to the original data.

The table has given the original numerical data of the height achieved by the gold medalists at various Olympic Games.

Before graphing the data, note that the Olympic Games were not held in year 1940 and 1944 because of the wars. In addition, I will change the year values to smaller values by using the 4 years gap between the times of Olympic. I was going to set 0 value for

At the last test of cubic function model, I decided to choose middle points of the data given. I will choose the middle point first two data. Because in figure 1, we can see that these two points have relatively lesser gap in x value, than the gap of x value between the second point (40, 203) and the third point (52, 198). And then, I will separate other data into 3 groups of 3, and figure out the middle points.

For finding middle point between two points, we should use;

Suppose the function is:

Substitute the points into the equation, and I got;

For using matrix, we should know

By Graphing Calculator (GC), the solution is (remain to 6 significant figures);

So, the cubic function model 3 is,

Figure 10 The red points show original data, and the blue curve is the cubic function curve.

The table above shows the difference value of y and y2 in three different cubic models which have used three various sets of points. We can see that, although the third model has only one difference greater than 6, the model 2 has the least difference among three of them with the least differences in 6 data among 11 data given. Therefore, I will choose the second model as the representative model of cubic function.

The general form of quartic function is:

As I solved the cubic function by matrix, I am going to find out the coefficient a, b, c, d and constant e in matrix again.

Since there are 5 unknown variables, I have to determine what 5 points going to choose. Still, I will pick the first and the last points, and the point listed in middle.

I will try two times to test the quartic function. I will fix these three points, and I am going to set three different sets of two points. First time, I will choose point (52, 198) and (76, 223). Second time, I will take two middle points solved by using 4 points each. The 4 points are the points colored in black in the table.

Substitute the points into the equation, and I got;

For using matrix, we should know

By Graphing Calculator (GC), the solution is (remain to 6 significant figures);

So, the quartic function model 1 is,

Figure 11 The red points show original data, and the blue curve is the quartic function curve.

Since the original curve is looked like a linear functional curve, I tried to find the trend curve by using MS excel;

Figure 16 the original graph and its trend shown.

My investigation started from analyzing the given data, and I developed it one after another. For the first, the task is analyzed based on the limited number of the data given. I tried the sine and cosine functional curves first, quadratic function curve next and then tried linear function curve by using characteristics of functions. Because the functions I mentioned were not fit to the data given, I tried to consider the cubic and quartic functions to figure out the best-fit functional form. I tested three different cubic models and two different quartic models. I made the models to have different points so that able to find the model which is closest to the original data. For the limited number of data given, I found that the quartic function, especially for the quartic model 1 is the best- fit functional curve. However, when I attempted to check whether the quartic model is fit to the other data or not, I discovered that my function model curve was only fit to the data which is limited, given first. I used the data, include the second data set, or the data given later, I drew out the graph to notice the trend. Eventually, I saw that the trend was more likely to the linear functional curve. Although the gradient of the curve is not constant, the data has increasing trend. Therefore, in short, through the processes, I got my best-fit function curve, which is linear functional curve.