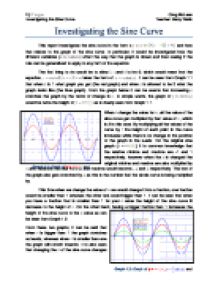 This report investigates the sine curve in the form o

f, and how that relates to the graph of the sine curve. In particular, it would be investigated how the different variables (

effect the way that the graph is drawn and then seeing if the rule can be generalized to apply to any form of the equation.

The first thing to do would be to allow

to be 0, which would mean that the equation

takes the form of:

is 1 what graph you get (the red graph) and when

is allowed to be 2 what the graph looks like (the blue graph). From the graph below it can be seemn that increasing

stretches the graph by the factor of change in

. In simple words, the graph of

would be twice the height of

as is clearly seen from Graph 1.1.

When I change the value for

, all the value of the sine curve get multiplied by that value of

, which is 2 in this case. By multiplying all the values of the curve by

the height of each point in the curve increases while there is no change in the position of the graph in the x-axis. For the original sine graph (

) it is common knowledge that the relative minima and maxima are -1 and 1 respectively, however when the

is changed the original minima and maxima are also multiplied by

and therefore the new minima and maxima would become

respectively. The rest of the graph also gets stretched by

as this is the number that the whole curve is being multiplied by. 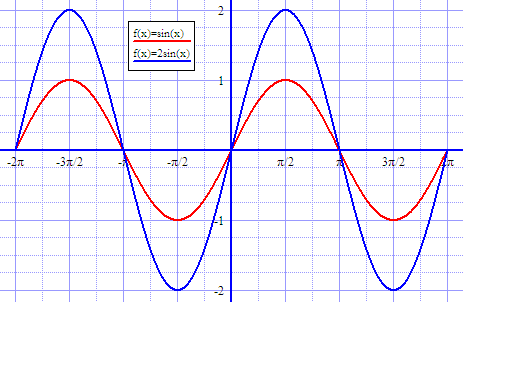 This time when we change the value of

In general it is observed that in the equation

the period of the curve is given by

. By changing the value of

you can change the period of the graph.  When you increase the

the period of the graph decreases and when you decrease the

the period of the graph increases. This means that the curve only stretches in the horizontal direction while there is no stretch in the vertical direction of the curve.

0 you get the equation

corresponds to the horizontal translation of the graph. When

is a positive number the translation is a horizontal translation to the right, whereas when the value of

is negative the graph translates to the left by

units as illustrated by Graph 3.1. 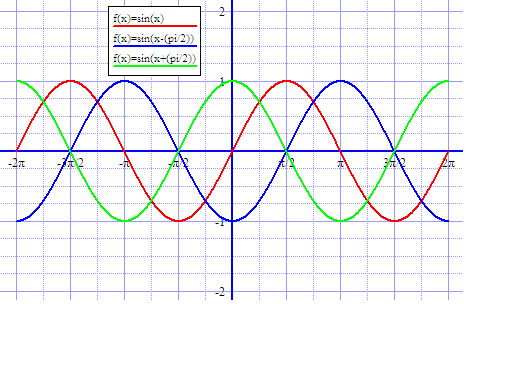 When you change the value of

you subtract the original value of

value of the new curve would be increased by

value. For example, when

. However when there is a value for

must be equal to

. This would translate the point and the rest of the graph by

units to the right. This would only cause a translation meaning that there is no change in the amplitude or the period of the curve. From Graph 3.1, it can also be seen that that when

is a negative number, the equation becomes

and this causes the graph to translate

units to the left.

From Graph 3.2 it can be seen that the value of

and therefore could be a translation. Just like the sine curve, the amplitude (

) of the cosine curve is

units, meaning that the value of

. When we plug the numbers into the equation of the sine curve

the equation that we get is the following:

. Since this equation is for the cosine curve we can say that

. However, there is another way to express this translation. It can be said that the graph of

was flipped with respect to the

axis and then translated horizontally to the right by

units. When this is the case

. The equation for this new translation would look like

and is something else which could be used for calculations in trigonometry.

In conclusion, it was observed that there is a strong relationship between the variables of an equation and how the graph looks. In terms of the sine curve, the variables represent the amplitude, the period and the translations (horizontal and vertical) of the curve. This allowed us to come up with a graph without having to plot it, and when we plotted the graph our guess was shown to be correct indicating that the idea of the variables was correct. Near the end of the investigation, we used these variables and the sine curve to come up with a relationship between the sine and cosine curve which would then help us in future trigonometry calculations. Just like that, we can deduce different relationships between different sorts of sine, and cosine functions to help us in future calculations.