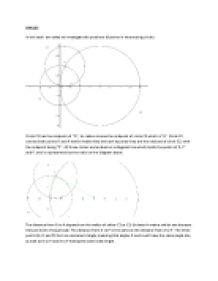 Maths IA. In this task I am asked to investigate the positions of points in intersecting circles.

In this task I am asked to investigate the positions of points in intersecting circles. 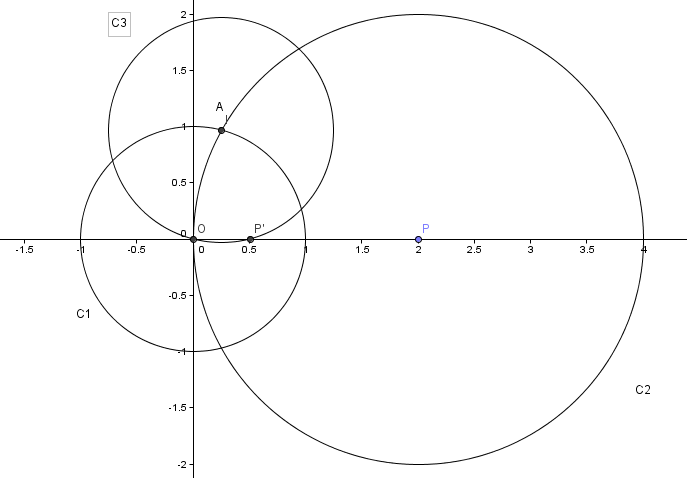 Circle C1 has the midpoint of “O”, its radius crosses the midpoint of circle C3 which is “A”. Circle C2 crosses both points O and A which means they are both equal as they are the radiuses of circle C2, with the midpoint being “P”. All three circles are located on a diagonal line which holds the points of O, P’ and P, and is represented by the x-axis on the diagram above. 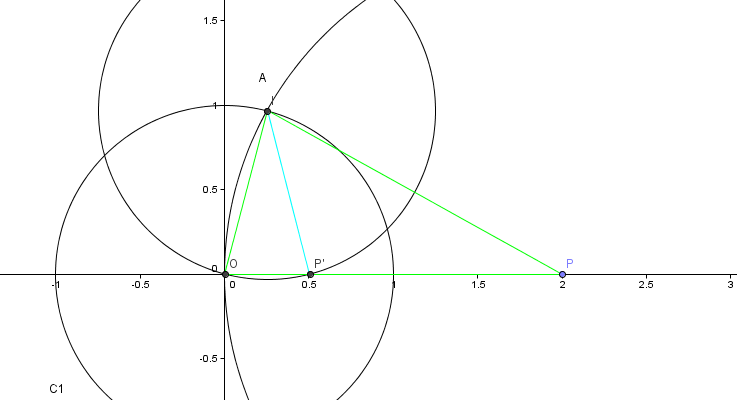 Because of the three points I am able to make a triangle (mentioned above), yet I have another point which is P’. Drawing a line from A to P’ I am able to divide the triangle into two forming another (smaller) isosceles triangle. Now the angles of sides O and P’ will be equal, as well as the side lengths of O to A and P’ to A. 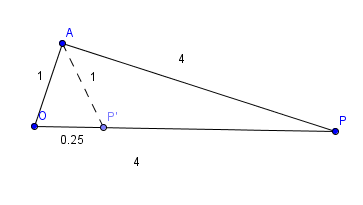 Using the three different values for O to P (OP=2, OP=3, and OP=4) I was able to come up with a general statement as I saw a pattern developing in my results for the distance from O to P’. Each time that the length of O to P increased the fraction decreased:

Each time that the value of O to P is increased the fraction decreases because the denominator increases each time while the numerator stays the same.

The lower the fraction that I

, the larger the angle becomes:

This pattern continues as I keep increasing the distance from O to P.

Then I looked at the values of O to P that were increasing.

I took the radius and divided it by the length of OP:

This method gives an accurate enough measurement of the length of the side O to P’.

Testing the validity of the general statement

The limitations of the general statement

When using cosine and sine to figure out the angles and side lengths the calculator gives of more numbers. I put those numbers to three significant figures cutting of the rest. Yet when I use the general statement formula the numbers I am given are more basic which could result in a small, (not very significant) calculation error. Apart from that I found my general statement to work well in solving these problems.

Explaining how I arrived at the general statement

From looking at my results for the first problem I created a general statement formula. I noticed that the radius stayed the same so I placed it on top of my equation and divided it by the distance from O to P giving my length of O to P’

Although when I reached the second problem the general statement did not work therefore it meant that I would have to modify it somehow to make it work. I squared the radius and divided it by the length O to P.

When I looked back on the first problem the modified general statement formula worked, as squaring 1 (

) will still give me 1 therefore not changing the values I received through the use of technology through sine and cosine.