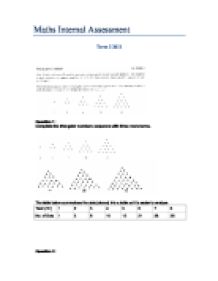 The table below summarises the data (above) into a table so it is easier to analyse.

Find a general statement that represents the nth triangular number in terms of n.

The table below shows the connection and calculation between the term and the number of dots for the given triangular numbers.

Square numbers are also geometric shapes which lead to special numbers. Therefore, we must take into account these square numbers in order to find out the general statement.

When we compare the square numbers to the triangular numbers, a connection is discovered. We can see that: 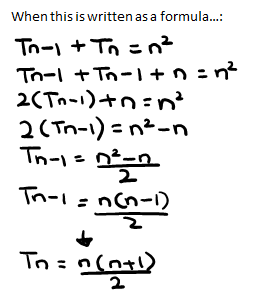 Another method in finding the general statement is by using multiplication. By this I mean:

Excluding the first layer (layer 1), as the stage number (Sn) and layer increases by 1, the number of dots correlatively increase by 12.

Find an expression for the 6-stellar number at S7.

Find a general statement for the 6-stellar number at stage Sn in terms of n.

Firstly we shall find more expressions for the 6-stellar numbers:

However, this expression is not complete as it does not apply to the 6-stellar numbers. Therefore, as previously stated, for the triangular numbers, n-1 = n(n-1)/2. So if this is substituted into the equation, the general statement should be discovered.

Now repeat the steps above for other values of p.

The chosen value for p is 7.

Secondly, the knowledge of the triangular shapes was also applied to the creation of the 6-stellar numbers to discover the connection between the number of dots and the layers. By finding this link, it was possible to create an expression for the 6-stellar number which linked with the triangular numbers. All these previous steps led to the formation of the general formula which was 12 x ((n(n-1)/2)+1.

Then, by drawing the diagram of the 6-stellar number a particular pattern emerged. It was about the consistent addition in the number of dots as the layers increased. In other words, the first 'star' consisted of one dot, the second layer (star) contained 12 dots, the third had 24 dots, the fourth layer had 36 dots. As one can see, the number of dots is increasing by 12 excluding the first -> second layer. Without exploring the triangular numbers, it would have been difficult to express this abnormality.

The final step was to test if the general statement could be applied to the stellar numbers in terms of 'p' and 'n'; which was successful; however with some few limitations such as the 0, 1, 2 and decimal numbers substituting the 'p' value.