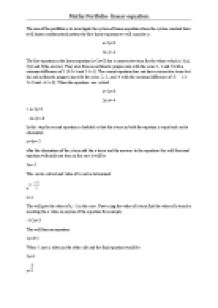 This can be solved and value of x can be determined

This will form an equation

a linear equation can be written as:

after multiplying we will get:

as clearly proven in the conjecture x=-1 and y=2 and from this we can make an estimation that in any linear equation with constants forming an  arithmetic series , the point of intersection is always (-1,2)

Now this was a 2x2 linear equation but if we consider a 3x3 equations let us investigate  the solutions :

Therefore the equation of line on the plane would be

, hence they meet at this line.

Now let’s look at some other 2x2 linier equations like:

These equations can be rewritten in line format y=ax+b

If we change the equations they would look like:

in this case a=

And the second equation would be

In the first equation

And in the second equation

From the graph we can observe that there is a horizontal parabola formed due to no points passing through a region. We can prove this theoretically by solving the equations of the linear pair in G.P.