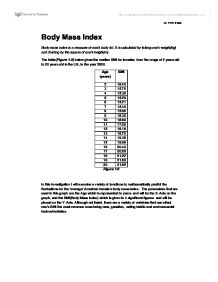 I think my model fits this data reasonably well, although there are a few minor hiccups. After reviewing the data from women in the US and girls from China, it is safe to say that the quartic and Gaussian function are reliable enough to model their BMI from age 1 to 20. However anything after that is unsure of. There are a few reasons why the data from girls in China does not match those of the curves of the model such as the data being taken from the year 1995 In comparison to the year 2000 for the American women. The girls/women from China are also not divided into one group, however they are separated into two groups; urban girls and rural girls, thus making it slight inaccurate and difficult to compare. The variables of the girls are not known as well, which also make It hard to contrast. To make the model match the data of the girls from China, a simple shift down the Y-axis would have to be made, therefore connecting the girls from China data on to the quintic and Gaussian model. ?? ?? ?? ?? SL TYPE II BMI ...read more.