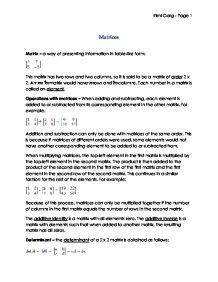 Matrix – a way of presenting information in table-like form:

This matrix has two rows and two columns, so it is said to be a matrix of order 2 x 2. An n x m matrix would have n rows and m columns. Each number in a matrix is called an element.

Operations with matrices – When adding and subtracting, each element is added to or subtracted from its corresponding element in the other matrix. For example:

Addition and subtraction can only be done with matrices of the same order. This is because if matrices of different orders were used, some elements would not have another corresponding element to be added to or subtracted from.

Because of this process, matrices can only be multiplied together if the number of columns in the first matrix equals the number of rows in the second matrix.

Determinant – the determinant of a 2 x 2 matrix is obtained as follows:

The first three portions of the equation are simply different ways to notate “determinant of matrix A”. To find the determinant of a 3 x 3 matrix, do the following:

Find the angle between two vectors – use the two forms of the dot product to solve for Θ. For example, consider vectors

. In order to be written in terms of component vectors

, the following must be done:

Vector equation – a straight line is uniquely defined if given the position of one point that lies on the line and the direction of the line. In terms of vectors, this means that a line is defined if the following is known:

Therefore, the vector equation of a line is written as follows:

d from the origin to the plane, so that it is perpendicular to the plane and parallel to n.

Position vector a and vector d form a right triangle. Make the angle between them (at the origin) be θ. This means that:

Recall that the alternate form of the dot product is:

Using this form of the dot product and our previous equation, it can be proven that:

Where d symbolizes the magnitude (or length) of vector d.

For example, the distance from plane with scalar product formula

to the origin is

, the distance between them is:

Note that this method only works with parallel planes, because two non-parallel planes intersect and the distance between them is zero.

Find distance from plane to line – the easiest way to find this distance is to pretend that the line is a plane, and then use the method described in the previous paragraph. For example, considering the plane

, the line can be changed into a parallel plane as follows:

Now, the distance between the original plane and the new “plane” can be found easily:

Find distance from plane to point – this method is almost exactly the same as the previous method. Simply change the point into a plane that is parallel to the original plane as shown in the above example, then find the distance between the two planes.