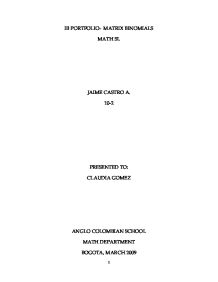 This project is about 2x2 matrices or matrix binomials; the aim of this work is to demonstrate a good and clear understanding of matrices and the operations that can be done with them.

Since there are many basic calculations that aren’t really important we will use a GDC (graphic display calculator) in order to speed up the development of the project.

With the help of a GDC (Graphic display calculator) the calculations for the matrices were done and registered below.

which can be expressed in a matrix form, like it is shown below.

To find an expression for

, so we can star by stating that

should be equal to

which can also be expressed as

), we can check this by diving each element of both of the

calculated previously by their respective values of

and the result should be equal to

which can be expressed in a matrix form, like it is shown below.

, we know that by definition A is aX and

is the same as

. Starting from this we can develop an expression for

We know that matrix

Now if we use our general statement it should give use the same when we replace the values of a, b and n with the ones used to develop

Once again the statement worked and therefore I can consider it a general statement.

In my opinion the project was developed in a good and coherent manner, there weren’t any serious problems or difficulties during the processes and the results obtained were satisfactory, since I was able to generate the general statement and the other expressions for the different matrices powered by an n integer.

During the process I used all my knowledge about matrices which helped me to develop a good understanding of the questions in order to obtain the different answer.