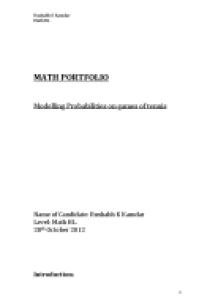 Modelling Probabilities on games of tennis

Modelling Probabilities on games of tennis

In this portfolio I shall investigate the different models and probabilities based on the probabilities in the game of tennis. First I will start with the Part 1 of the portfolio where I will be concluding with the expected value and the standard distribution from my results.

I will then take a look at the Non Extended play games where the highest of 7 points can be played. This is will be done with the use of binomial distribution. Then I will calculate the odds of Adam winning the game of tennis and will generalize my model so that I can apply to any other player. After making this model, I will take a look at the extended games where in theory the game could go on forever. This is the stage where I find a model to find the odds of Adam winning the extended games and then will generalize this also.

In the Part 3, I will also test the model for different values of point winning probabilities and find out the odds for each of them and then will then look for patterns from the values of odds that I find.

Therefore from this it can be seen that there are (2 + 8 + 20 + 40) = 70 different possible ways in which the game can be played showing the different combinations possible when a player loses all the games. After finding the different ways the game can be played in, now I shall work out the probability of Adam winning the game. The different possible ways in which Adam can win the game are 4-0, 4-1, 4-2 and 4-3; and so now I will have to find the sum of probability of these events taking place.

The model for the probability of a particular outcome of Adam winning the game would be:

Below are the ways in which Adam can win:

Therefore the probability of Adam winning the game is the sum of the above probabilities:

The formula for the odds of Adam winning=

There are also several limitations to my models due to which they are not entirely realistic. The point probabilities, which were given, are never constant in a real game and are influenced by many factors such as the climatic conditions, stamina of the players, injuries, etc., due to which the probability values can sometimes go entirely wrong. Even when we look at the extended game, the possibility of the game going on forever decreases the reliability on the point probabilities. But if we look on the other hand, the models that I have developed shows that how the player’s dominance over the game affect the overall results and also how the variations in the game, like changing the rules increase the possibility of a stronger player to win the game. Therefore this model is also useful to a large extent.