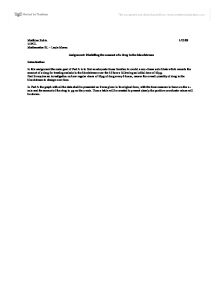 Modelling the amount of a drug in the bloodstre

Assignment: Modelling the amount of a drug in the bloodstream

In this assignment the main goal of Part A is to find an adequate linear function to model a non-linear set of data which records the amount of a drug for treating malaria in the bloodstream over the 10 hours following an initial dose of 10μg.

Part B requires an investigation on how regular doses of 10μg of drug every 6 hours, causes the overall quantity of drug in the bloodstream to change over time.

In Part A the graph with all the data shall be presented as it was given in its original form, with the time measure in hours on the x-axis and the amount of the drug in μg on the y-axis. Then a table will be created to present clearly the positive coordinate values will be shown.

One way of approaching the first part of the assignment, is by looking at different functions and look how they suit the data, and examine if one of these particular functions resemble the nature of how the data may behave. A novice approach would be to use technology, more specifically the calculator.

So to clarify how to get the values of these different function: one must select one of the optional items and then make sure to specify the data list names which are L1( press 2nd 1) and L2 ( press 2nd 2). It should be presented like this using the quadratic regression as an example:

Then to continue this assignment, each function shall be graphed using graphing programs such as Autograph or the calculator and evaluate which one suits the data best and why the others do not.

This is function is probably the simplest to represent this data but it is the most inaccurate way. This graph tends to -∞ which is incorrect because there is no negative amount in the bloodstream. 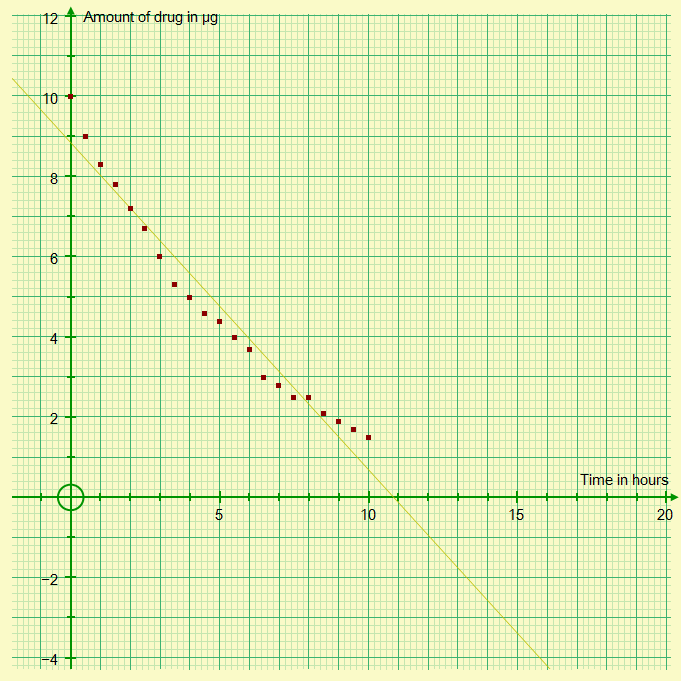 A best fit line for this non-linear set of data would be one which tends to zero. 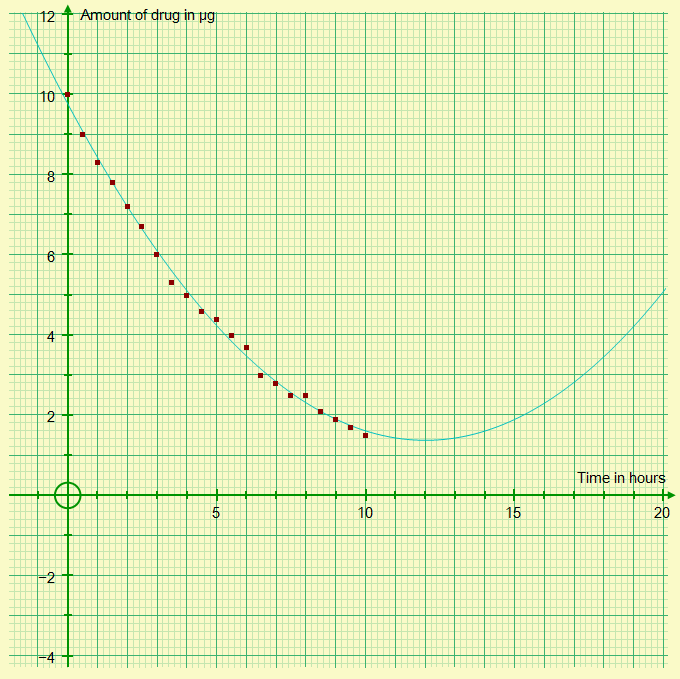 This graph passes through points approximately but it is incorrect because of the fact that it doesn’t tend to 0 and instead shoots up to ∞. 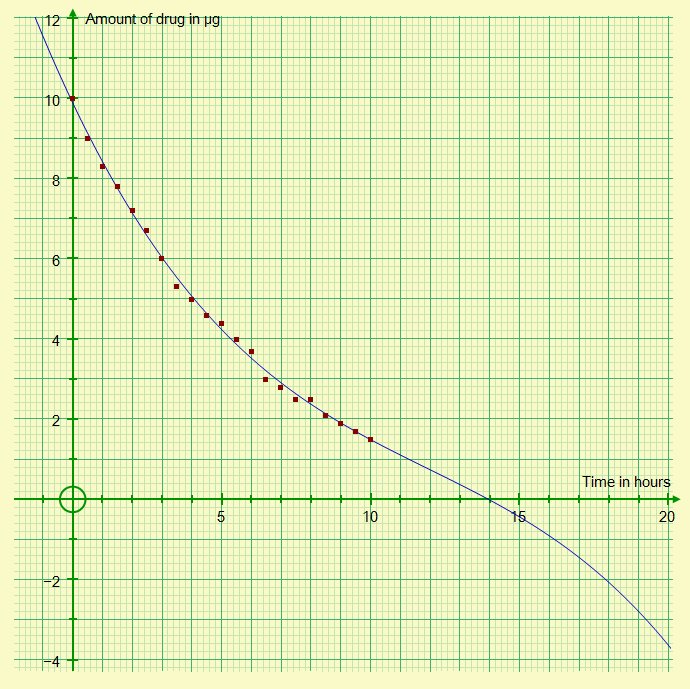 The cubic equation resembles adequately to the behaviour of the        non-linear data but it doesn’t suit it because like the linear equation it tends to -∞ which is incorrect because there is no negative amount in the bloodstream. 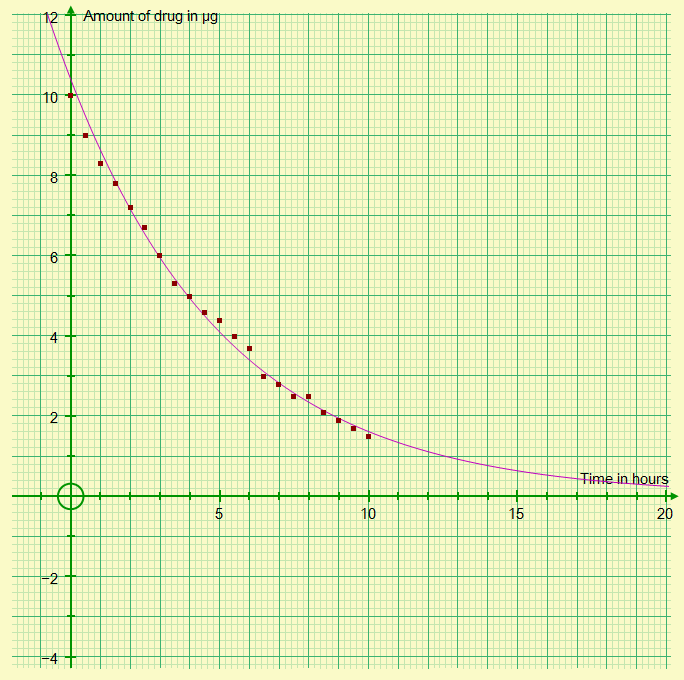 This graph tends to zero, so therefore it cannot be a graph which tends to infinity like a cubic equation or a simple linear equation. This graph cannot start at -0 because there is no negative amounts in a bloodstream.

The quantity of drug tends to decrease over time at a rate proportional to its value, which would therefore mean it is an exponential function.

Note that it is an exponential decay, it never touches the x-axis, although it gets arbitrarily close to it (thus the x-axis is a horizontal asymptote to the graph).

Now that the function has been chosen, a question may have been asked on why this exponential function is formed as y=abx and does not look like y=ex (as it should popularly look like).The following explains why.

To start with, e is a mathematical constant, meaning it is a particular number or amount that never changes. In this case e is the base of the natural logarithm which equals approximately to 2.718281828.

When the exponential function is with a base of  b  it means this b = eλ  where λ is equal to a constant.

The a which is placed before the b is f(0), which means it is the point where the graph cuts the y-axis.

If we put all these pieces the formula should evidently look like the following:

The calculator found the values for a and b of the exponential function using the least square fit, but it can also be found manually.

The minimum value is approximately 4.55μg

To find the maximum amount during this period an average is made (exactly like the minimum) for all values each six hours:

Realistically if no further doses were taken after this 24 hour period then the amount of drug in the bloodstream would decrease at the same rate as the initial function decreased, as there no new intake. Eventually there will be no drug left in the body. It could be argued abstractly though, that since it is an exponential decay, it never touches the x-axis, although it gets arbitrarily close to it (thus the x-axis is a horizontal asymptote to the graph). So according to the exponential function their will forever be some traces of drug in the body, but it would be so minute that realistically it would no longer be considered to be in the bloodstream for it could be difficult to identify.

If the drug is continued to be taken every six hours it would seem very predictable that the minimum and the maximum amount would eventually stabilize. The increase of each doses would decrease over time due to the exponential rate of decay. Hence this would clearly mean that the maximum and the minimum amount would tend to a stable value. The graph on the next page shows longer term behaviour over a 48 hour period, and this confirms my theory.

The minimum value is approximately 4.88μg

The maximum value is approximately 14.8μg