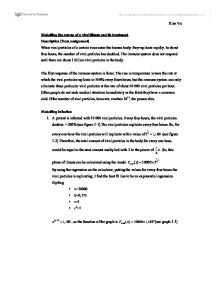 Modelling the course of a viral illness and its treatment

By using the exponential regression, putting in the values (see figure 2-1). I find the function and by solving e0,1137=1,125. I will get a function that looks like this So the growth factor after 26,6 hours when the human body has fever is 112,5 % found through regression.. However, the immune system will eliminate 50000 viral particles per hour so I need to subtract 50000 from the total amount. Which means, . Since a person will die if the number of viral particles reaches 1 million (1012), we can estimate the time using the model. Vn=1012, so 117,3 hours is the remaining time after the immune system have responded. So to find the total amount of time the patient have before he dies can be found be adding the time it takes from when the patient is infected to the immune system response adding with the times before it exceed 1012 viral particles. ...read more.

This makes me see the small differences in the precision of the values Applying your model 7. If the patient is a young child instead of an adult, than the models have to be modified carefully. The immune system of a child is weaker than an adult, so this means the immune system would respond later than an adult. Therefore, a child would die earlier of the amount of viral particles than an adult if left untreated, because the body of a child is smaller and the immune system eliminates less particles. The amounts of dosage and medications also have to be reduced, since a body of a child can not handle as much compared to an adult body. So the time to start the regimen of medication also have to start earlier, since a child is smaller than an adult and the body can not handle the same amount of viral particles. So the models of immune response have to be increased and the medication has to be decreased. Appendix Graph 4-1 ?? ?? ?? ?? Kien Vu ...read more.