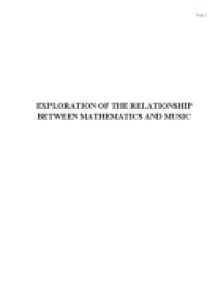 Music and Maths Investigation. Sine waves and harmony on the piano.

Transfer-Encoding: chunked ﻿Page EXPLORATION OF THE RELATIONSHIP BETWEEN MATHEMATICS AND MUSIC ________________ INTRODUCTION I have chosen to investigate the mathematical properties of music; to be more precise, the piano. Since an early age I had a great interest and appreciation for music, in addition, I had decided to play the piano and now I have been playing it for 11 years. I enjoy listening to various types of composers and musical artists varying from classical pieces to modern pieces. However, during my last year in my piano classes, I?ve got a spark of interest in figuring out how composers manage to compose pieces that are appealing to me and the public, especially, when some composers had health problems, which made the journey of creation quite hard for them, in this case, Beethoven created wonderful musical pieces while being deaf. After some personal research, I?ve found out that mathematics has a huge role in determining how it appeals to the public, as mathematics is related to the production of harmony. Thus, the aim of my exploration is to explore and understand how mathematics are related to harmony of music. All of the aspects of mathematics in relation to harmony will be focused on my main instrument ? the classical piano. Although music is made out of all of the aspects such as melody, harmony and rhythm, however, harmony is very intricate and requires an exploration of its own. This exploration will be split into three parts: the first one will comprise of the graphical representation of the notes and chords and which combinations of notes produce harmonic sound; the second part will explore how the Greek philosopher Pythagoras had contributed to music with ratios that later developed the harmonic series; the third part will delve into the probability of achieving harmony. PART 1: THE GRAPHING OF NOTES AND CHORDS USING SINE WAVES The piano is built on the foundation of an octave, which is comprised of 12 semitones ending on a note twice the frequency of the first note?s tone. ...read more.

Pythagoras, known widely for his theorem involving lengths of a right triangle, had a strong relationship with music. The philosopher was fascinated with the lyre, which at the time was a common string instrument in ancient Greece. First, he had observed that when two strings of the same length, tension and thickness were plucked, they produced a consonant sound. Secondly, Pythagoras found that strings of different lengths produced different pitches and generally dissonant sounds. Lastly, he realized that certain dissimilar string lengths produced a consonant sound in pair. The relationship between these notes he called an interval. The intervals can be seen as the harmonic note combinations from the previous part. The interval names are derived from the number of semitones they sit from the first note. From this he determined the octave, the perfect fifth, the fourth and so on. Each of these consonant pairs were so as the length of the strings was in a simple ratio like the octave (2 to 1), the fifth (3 to 2), the fourth (4 to 3) and etc. These ratios are reversible and apply to any type of string, hence they are relative ratios. Also, string length is related inversely to frequency that allows for the conclusion that frequency should have the same ratio of relationship to harmony. Although Pythagoras knew that he could keep using larger integers and continue the pattern, in addition, he wanted to keep his mathematics simple. The Greek philosopher believed the simpler is more correct. In these days, we have the harmonic series, modeled by Pythagoras? observations, by which the formula of the series looks like this: Firstly, we must make some observations. In this series we have n going up to infinity, which means that there isn?t any point to ?complete? the series. The whole series begins with the fraction and increases by one in the denominator for subsequent fractions. ...read more.

String imperfections of any other type of interference was not accounted for which likely yield a different set of results. It would be interesting to take a look at more realistic waves to see if they have the exact same harmonic behavior. Adding on to our previously discussed patterns, we incorporated the idea of a series that models the relationship between frequency and period length. This we saw as the harmonic series. It helped us determine its properties, especially its divergence. From this property we understand that although seemingly simple in the finite world, basic patterns such as the Harmonic series can extend into more complex realms with logical reason. Also, the Harmonic series lends to the question of how many other natural phenomena are dictated by simple patterns in mathematics? Finally, we explored probability. The likelihood that at random one could play a harmonic or consonant chord. We found this probability to be quite low, unsurprisingly. However, we note that if one truly understands the patterns behind the music, the probability can be greatly and consistently increased. We see this apparent in the many works of Beethoven, who although going deaf in his middle ages, he was still able to produce incredibly beautiful compositions that incorporated perfect harmony and a strong sense of emotion. This exploration helped me to understand more about series and limits, probability and the behavior of sine graphs. In abstract, I have a new understanding of how mathematics relates to reality in simplicity and importantly, in imperfection. For one to further these mathematical investigations, need not look farther than music theory. This ever evolving science uses the power of patterns described in mathematics to achieve a deeper understanding of music. One could explore the area under our harmonic series if it was modeled in a curve using integrals. One could combine the psychology of piano note choosing and get a more realistic understanding of consonant probability. There are many facets in the mathematical regions of music which we have yet to scrape the surface of and they are only waiting to be discovered. ...read more.