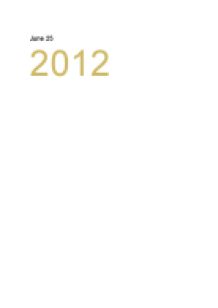 Polynomials represent a large area of mathematics. The word itself is a combination of the Greek poly and Latin binomium, meaning "many" and "binomial".

A polynomial function is in the form:

is a non-negative integer and

We define roots or zeros of a polynomial the x-values for which these equal to zero;

Real roots of a polynomial are graphically represented by their y-intercepts, but how can complex roots be identified?

In this task, I will investigate the method of shadow functions and their generators, which help identify the real and imaginary components of complex zeros from key points along the x-axis.

To this effect, I will make use of the software Geogebra, a graphing program.

Quadratic polynomials are in the form

Their roots can be calculated by using the so-called discriminant

And are calculated to be

Let us consider the quadratic function:

Where the vertex has coordinates

We can find the zeros of this quadratic by expanding the function:

The "shadow function" to

which shares the same vertex but has opposite concavity and two real roots.

Let us proceed and use various values for

Allowing us to express 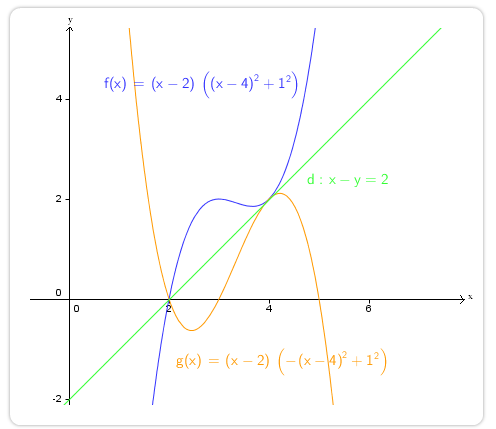 The shadow generating function is given by the equation

Which is the same relationship as with our previous cubic. Let us see if this pattern holds true with another similar cubic. 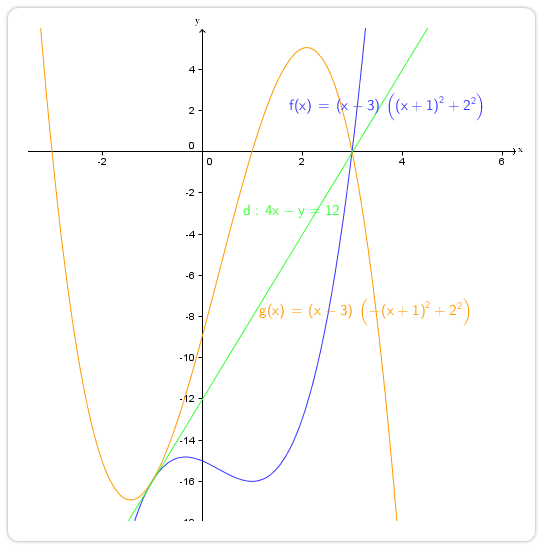 The shadow generating function can be read to be

It seems that, just like in the case of the quadratics, the relationship between

is given by the equation:

Let us try to prove this statement, by generalising the functions

These two cubics intersect where

The points of intersection are thus

And the equation of the line passing through both points

My assumption has been proven correct.

in the case of cubic polynomials is exactly the same as for quadratics. Perhaps, the zeros of

Taking into consideration the function

To show this I will use the function

The shadow function will have roots 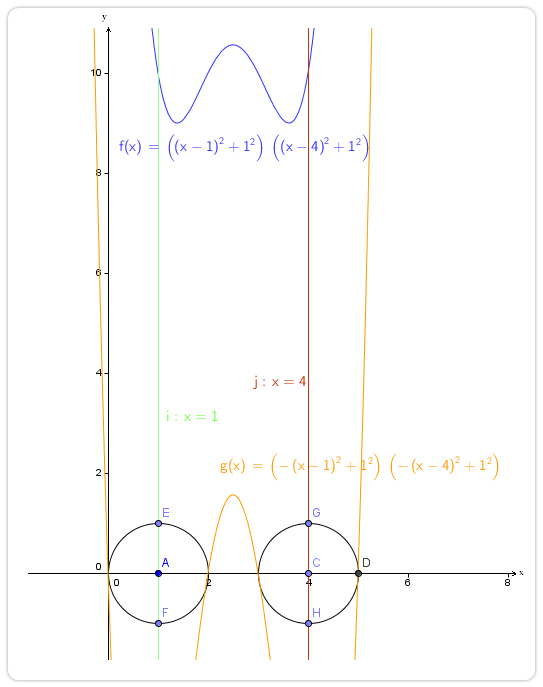 As we have two pairs of conjugate roots in this case, we will also have to draw two circles, with centre A and C (representing the

parts of the real roots under the form of

respectively. The lines passing through A and C and parallel to the y-axis intercept the circles at E, F and G, H. The new points represent, as expected, the complex roots

when interpreted on the Argand plane.

In this assessment, I have investigated and proven the relationship between quadratics and cubics with complex roots and their shadow-functions:

.  I also showed that, when knowing the equation of the shadow function, you can easily, graphically identify the complex roots of the original function, with my "circle"-method.

However, the case of quartics is more complicated. First of all, there are two different cases to consider:

, maintaining the above stated relationship.

But for the second case with four complex roots I failed to identify the shadow-generating function.

Yet, both cases still permitted me to graphically determine the complex roots of the original function from key-points along the x-axis of the shadow-function.