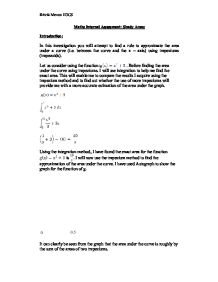 Area 0.652 Area for Fourth Trapezium 3.36 3.64 0.2 Area 0.7 Area for Fifth Trapezium 3.64 4 0.2 Area 0.764 Total Area 3.34 If the areas of the five trapeziums are added together, they give me the estimated area under the curve which is 3.34 0.604 + 0.62 + 0.652 + 0.7 + 0.764 = 3.34 The area given using the five trapeziums is still larger than the actual area found using the integration method ). Therefore it is an over - estimate of the actual area. However, the area obtained using five trapeziums are closer to the actual area than the area obtained using two trapeziums. The difference is not much. It can be said that using more trapeziums provides us with a lesser under/over estimate of the estimated area under the curve. To test this hypothesis, I will use 25,50,75 and 100 trapeziums to reach an estimate of the area under the curve. Using Autograph and Microsoft Excel 2007, I have created the following tables and graphs: ?? ?? ?? ?? Ritvik Menon H3CS ...read more.