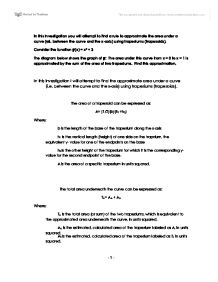 Shady Areas. In this investigation you will attempt to find a rule to approximate the area under a curve (i.e. between the curve and the x-axis) using trapeziums (trapezoids). Consider the function g(x) = x2 + 3

In this investigation you will attempt to find a rule to approximate the area under a curve (i.e. between the curve and the x-axis) using trapeziums (trapezoids).

The diagram below shows the graph of g.  The area under this curve from x = 0 to x = 1 is approximated by the sum of the area of two trapeziums.  Find this approximation.

In this investigation I will attempt to find the approximate area under a curve (i.e. between the curve and the x-axis) using trapeziums (trapezoids).

The area of a trapezoid can be expressed as:

h1 is the vertical length (height) of one side on the trapzium, the equivalent y- value for one of the endpoints on the base

h2 is the other height of the trapezium for which it is the corresponding y-value for the second endpoint of the base.

A is the area of a specific trapezium in units squared.

The total area underneath the curve can be expressed as:

TA is the total area (or sum) of the two trapeziums, which is equivalent to the approximated area underneath the curve, in units squared.

AA is the estimated, calculated area of the trapezium labeled as A, in units squared.

First I calculated the area manually by hand.  Then I tested these results with the use of technology, which in this case was the Riemann Sum Application on a TI-84+, which I used to create the table above.

The smaller the trapeziums, the more precise the area is because a smaller unit of measurement was utilized. It is possible to go on to infinity trapeziums, in which case the uncertainty would decrease more and more resulting in the relative error heading towards zero. This is because with more trapeziums it is possible to get a better approximation of the area since the line is going to a microscopic level, nearer to the original line. It gets nearer to the real value.

Use the diagram below to find a general expression for the area under the curve of g, from x = 0 to x = 1, using n trapeziums.

Based on the pattern observed from the diagrams above, a general equation can be written for the area under the curve of g, from x=0 to x=1, using n trapeziums.  [g(x) = x2 + 3]

c is equal to the end x value of the domain

a is equal to the beginning x value for the domain

Y= f(x), the equation of the curve

dx indicates that everything is being taken in respects to x

The above equation in its expanded form is:

The manual calculations derived from the general statement appeared to be very close to the exact answers as computed by the calculator. Based on the results, it appears that no matter the shape, using the trapezium rule provides with a fairly accurate and precise approximation.

Overall, to achieve the most precise and accurate approximation for an area under the curve, n, the number of trapeziums, needs to be divided into smaller subintervals.