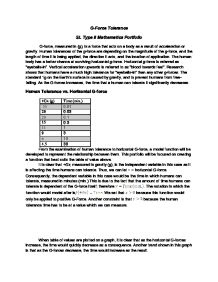 G-force, measured in (g), is a force that acts on a body as a result of acceleration or gravity. Human tolerances of the g-force are depending on the magnitude of the g-force, and the length of time it is being applied, the direction it acts, and the location of application. The human body has a better chance at surviving horizontal g-force. Horizontal g-force is referred as “eyeballs-in”. Vertical acceleration upwards is referred to as “blood towards feet”. Research shows that humans have a much high tolerance for “eyeballs-in” than any other g-forces. The standard 1g on the Earth’s surface is caused by gravity, and to prevent humans from free-falling. As the G-forces increases, the time that a human can tolerate it significantly decreases.

From the examination of human tolerance to horizontal G-force, a model function will be developed to represent the relationship between them. This portfolio will be focused on creating a function that best suits the table of value above.

It is clear that +Gx, measured in gravity (g), is the independent variable in this case as it is affecting the time humans can tolerate. Thus, we can let

Right now, there are seven

as well as seven

. They are listed below.

In order to find the

which is most appropriate for the model function, we must take the average of all of

and divide it by the number of

do not fit into the average range of -3 to -4. Thus, we will eliminate those 2 values for this calculation.

After finding the average of

, we can use the same method to find the average of

does not fit in the range of the calculation, thus, we can omit those 2 values.

The equation which I came up with is 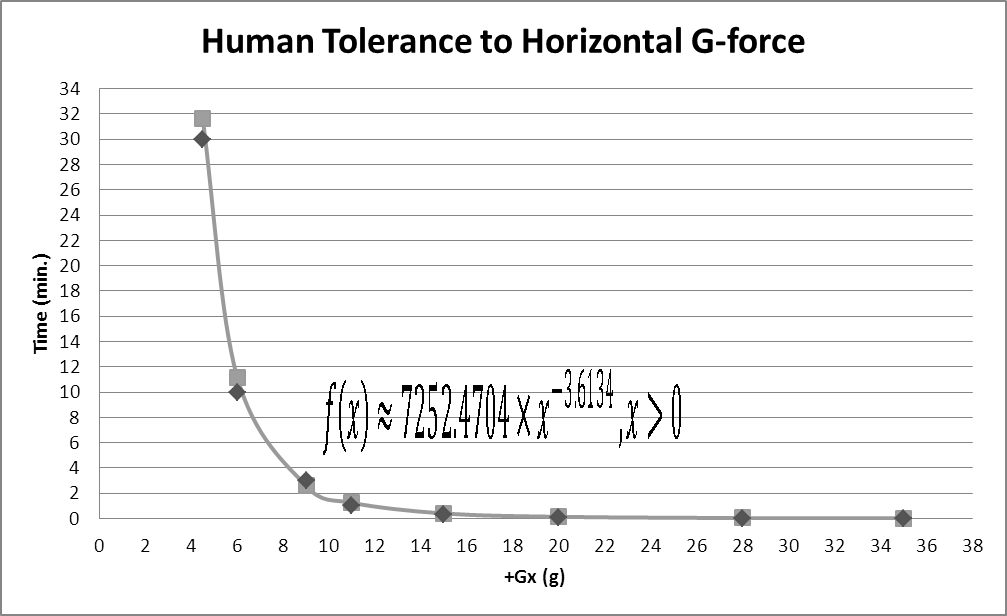 value below 0. This is another limitation as we cannot properly predict the

In conclusion, I see that my model can be implied to all other relations between Human Tolerance time and G-Force. This is because all of those relationships would undergo decay, and it is certain that as G-Force is increasing, the tolerance time is decreasing. Thus, with the alternation of the

value, I can find the functions of other relations between Tolerance Time and G-Force.