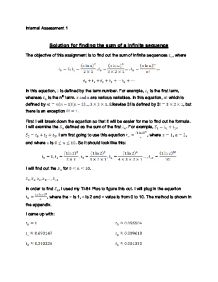 Solution for finding the sum of an infinite sequence

Solution for finding the sum of a infinite sequence

is defined by the term number. For example,

is the first term, whereas

is the nth term.

are various variables. In this equation,

which is defined by

, but there is an exception

First I will break down the equation so that it will be easier for me to find out he formula. I will examine the

defined as the sum of the first

. I am first going to use this equation

I will find out the

In order to find

, I used my TI-84 Plus to figure this out. I will plug in the equation

value is from 0 to 10. The method is shown in the appendix.

I came up with:

In order to check if I got it right, I used Microsoft Excel 2010. The method is shown in the appendix. 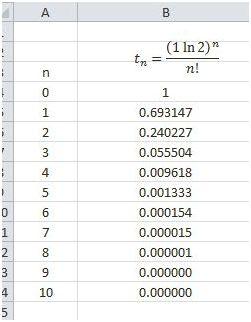 After seeing that my result matches the results in Excel, I decided to then find out the sum.

In order to find

, I will only use Microsoft Excel 2010 since I know that it gave me the right result before. I will plug in the equation

value is from 0 to 10. The method is shown in the appendix. 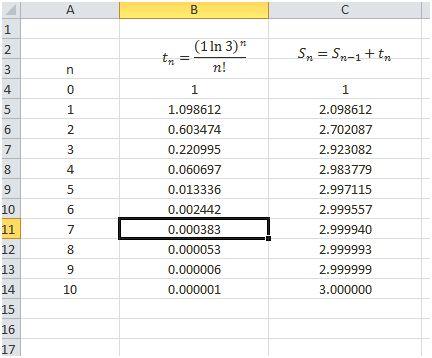 To find the results, I just subbed in 3 instead if

. Now I will graph it using the same process: 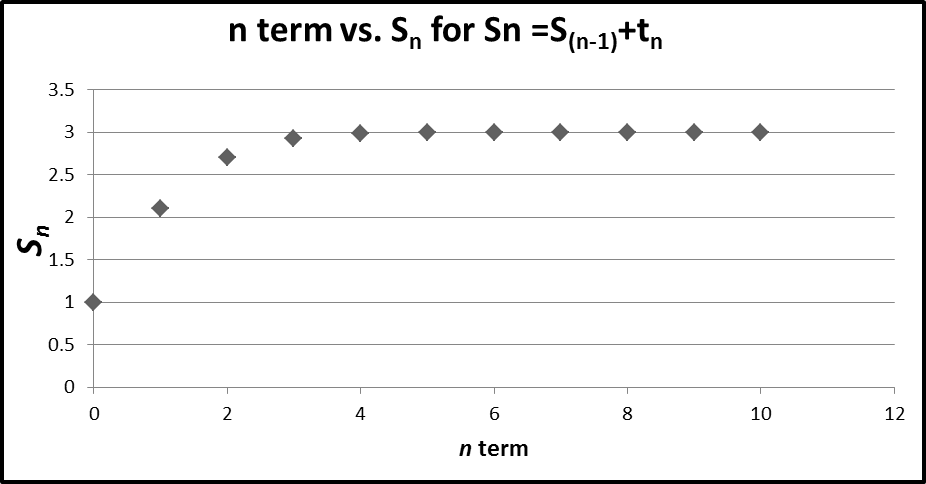 By looking at this graph, I can say that when

is 3 and it remains constant. This suggests that when

(infinity), sum of the infinity

After looking at the two sum, when

, I think that the general term is

is the sum of the infinite numbers.  I came up with this formula because we know,

After I pressed ENTER key, I got this result –

This suggest there is no result when

. The reason behind this is that, when we punch in

, we get the same error. As we cannot solve it.

Now I am going to let a

I will use my TI-84 Plus in order to find out the situation. It looks like this –

So this means, when I use

as a negative number it will show some results. I will check if the result shown above different from the equation

This means, that when

it is equal to when

. But what happens when

is a negative number and

is a odd number. For example, when

This is what I get when I hit enter –

This simple means that you cannot solve a equation when there is a negative number. For example,

is a negative number,

can be both positive and negative number,

can also be both negative and positive number but only when

is an even number.