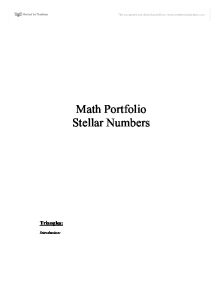 Throughout this task, I will first be trying to find a general statement that represents the nth triangular number in terns of n. After doing so, I will be able to complete the triangular numbers sequence by adding three more terms. I will have to go through several trial and error runs as well as numerous steps with the data that has been given in order to find the general statement, which would lead to finding the next couple of terms in the sequence.

After using this information and putting it all together, it was clear to see that the polynomial had to be a quadratic equation:

I then plugged the information given from the very start into the quadratic that I had found:

First of all, I found the number of dots (the stellar number) in each stage up to S6 by drawing each star and counting all the dots in one diagram.

After counting all the dots from each diagram, I was able to put all of the information in a table.

We can clearly observe that there is an increase of 12 dots for each consecutive stellar shape.

When I apply the pattern that was found above, I was able to find an expression for the 6-stellar number at stage S7: 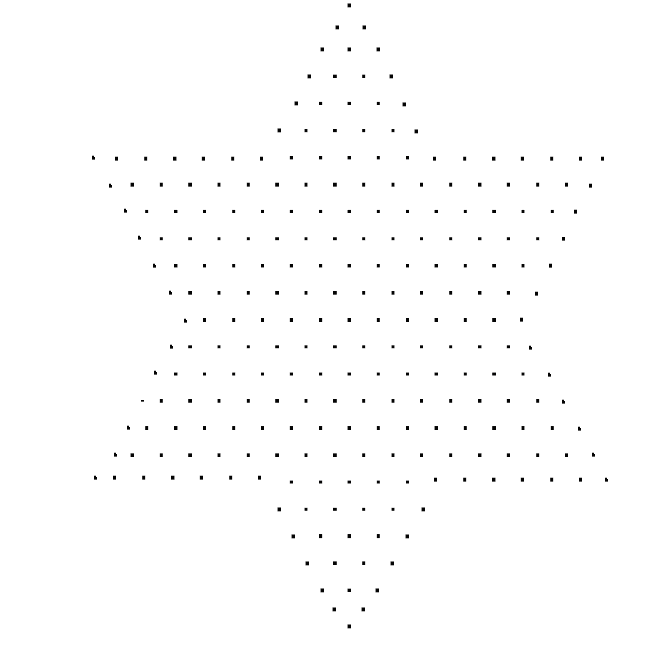 Following this, I was also able to find a general statement for the 6-stellar number at stage Sn in terms of n. To find it I had to go through several steps.

First, I found the positive difference of Sn:

I then inserted the information given from the very start into the cubic that I had found:

d value would increase by 2. 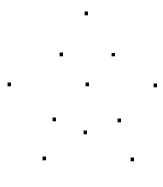 This Stellar Numbers Mathematics Portfolio required finding two general statements as well as different expressions and patterns. The first general statement that I found represented the nth triangular number in terms of n (Tn = 1/2 n2 + 1/2 n). When using this equation, the number of dots in a triangle can be calculate without having to count the dots individually.

The second general statement that was found was for the 6-stellar number at stage Sn in terms of n (Sn = -1/6n3 + 7n2 – 47/6n + 2). This equation helps calculate the number of dots in each star according to the number of rows in any stellar shape with 6 vertices. I also discovered that the d value changes depending on the number of vertices in a star.        There were also several limitations regarding the two different tasks. One was that no values could be below zero, as for that is unrealistic, and this is considered for both tasks. Another limitation regarding the first task (triangles) is that the equation only works for equilateral triangles (triangles with equal sides).  Secondly, for the Stellar Star Task, I discovered that the p value has to be at least 4 to be able to be seen in a stellar star shape. Also, the general statement for the Stellar Stars can only be used for 6-Stellar Stars.