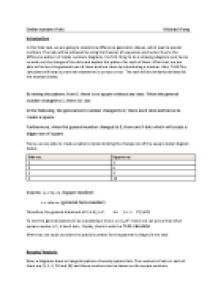 Stellar Numbers. In this folio task, we are going to determine difference geometric shapes, which lead to special numbers.

In this folio task, we are going todetermine difference geometric shapes, which lead to special numbers. The task will be achieved by using the theories of sequences and series. Due to the difference pattern of stellar numbers diagrams, the first thing to do is drawing diagrams and hence to work out the change of the dots and explain the pattern for each of them. After that, we are able to find out the general term of them and test them by substituting a number. Also, TI-84 Plus calculator will help to prove the statement is correct or not.  The task will be similarly achieved by the example below,

By seeing the pattern, from 0, there is no square without any dots. When the general number changed to 1, there is 1 dot.

In the following, the general term number changed to 2, there are 4 dots and hence to create a square.

Furthermore, when the general number changed to 3, there are 9 dots which will create a bigger size of square.

Hence, we are able to create a table to demonstrating the change rule of the square stellar diagram below,

n = side no. (gerneral term number)

To test this general statement, by subsidising 2 into n, so U2=42, hence we can prove that when square number is 2, it has 4 dots.  Finally, check it with the TI-84 calculator.

To see the graph, we can Select GRAPH again,

By using computer software “stellar”, we can plot the shapes below,

Here are the first six stages of the P (5)-STELLAR SHAPE, and we can now create a table to demonstrate the number of dots in each of the stage,

One more layer will be adding on the privets stellar by increasing the general term number to 1. Thus, the different between F1 and Fn+1 will be the outer shell dots number (Fn). Every new lay been added on the stellar, its outer shell number will have 10 more dots.

Fn is the number of dots that the diagram contains.

X (the number that multiple to 10), has the following relationship with n when p=6

Hence the general formula for Stellar number will be

Again, check the answer by using the TI-84Puls calculator with the same method which is used for the triangular numbers.

For example, p( 5 )-stellar shape as an example.

As the diagram show, although we had changed the density of the p (5)-stellar shape, they also contain 5 vertexes and actually contain the same number of dots.

The result is reliable, as the general statement is supported by the equations generated in the cases of a p (5), p (6), p (7) and p (8) -stellar shape. The numerical coefficients in each equation are equal to the corresponding stellar number.

(p) Must be greater than 3 and applied to all p-stellar shapes given that pϵ R.

The methods of use TI-84 Plus calculator to find out the relationship between general term number n and the triangular number (number of dots) in a general statement.