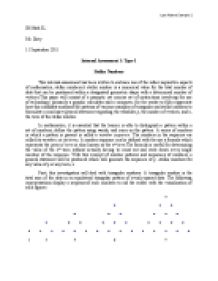 Stellar numbers. This internal assessment has been written to embrace one of the rather inquisitive aspects of mathematics, stellar numbers

This internal assessment has been written to embrace one of the rather inquisitive aspects of mathematics, stellar numbers.A stellar number is a numerical value for the total number of dots that can be positioned within a designated geometric shape with a determined number of vertices.This paper will consist of a panoptic yet concise set of instructions involving the use of technology, primarily a graphic calculator and a computer, for the reader to fully appreciate how this candidate analyzed the patterns of various examples of triangular and stellar numbers to formulate a conclusive general statement regarding the variables p, the number of vertices, and n, the term of the stellar number.

In mathematics, it is essential that the learner is able to distinguish a pattern within a set of numbers, define the pattern using words, and carry on the pattern. A series of numbers in which a pattern is present is called a number sequence. The numbers in the sequence are called its members or its terms. A number sequence can be defined with the use a formula which represents the general term or also known as the nth term.The formula is useful for determining the value of the nth term without actually having to count out and write down every single member of the sequence. With this concept of number patterns and sequences of numbers, a general statement will be produced which will generate the sequence of p -stellar numbers for any value of p at any term, n.

With the help of Table 4, where the different patterns have been organized, the pattern is much easier to visualize and interpret. The last 4 columns show the sum of the stellar numbers expressed in different forms and notations. The 1st column shows the sum in terms of adding the 1st difference to the previous term. The 2nd column replaces the previous term with a numerical value. The 3rd column takes that value and substitutes it with an expression of the sum of the previous term. After this process of logical reasoning, the pattern is now clearer to see. With exception to the first number, everything else can be factored out to a common factor of 12. By factoring everything out, the expression is recorded in the 4th column. At a first glance, nothing particular stands out, but the red bolded numbers correspond to the exact same numbers from the previous task of triangular numbers.

Hence, it’s been derived that the general statement for a 6-stellar numbers is

A valid theory cannot be formed with only one trial/sample, so therefore several more trials will be tested for other values of p. The explanation of the process of obtaining the general statement for the next p-stellars will be swift as the reader is now accustomed to the concept of triangular numbers and one concrete example of a stellar number.

A sample of a 4-stellar will be tested first. The image of what a 4-stellar looks like is given to the left in Figure 4. Notice, that a 4-stellar is not a square, a misinterpretation that is very commonlymade. After drawing all the diagrams using the computer[2] and counting all the dots, the data was tabulated into Table 6 shown below.

By expanding (x-1)2+(x-1) and multiplying it by 8, the equation simplifies to

Hence, it’s been derived that the general statement for a 4-stellar number is

n and y were pasted). The table wasselected, and then a graph was created by following these steps: select the Insert tab and then choose the option shown in Figure 8, the 2-D Line Graph.On the graph it can be seen that as n increases, or in other words as it approaches infinity, the y value is always increasing showing no signs of a limit. Even though quadratic functions’ domain includes negative numbers, negative numbers and 0 are excluded from the domain, because it is impossible to have a negative term of a sequence and a 0 term does not exist.With regard tothe number of vertices,p>0 because it is not possible to have a stellar with a negative number of vertices or a stellar without any vertices.Figure 8

What this investigation has showed is that it is possible to derive a pattern out seemingly ordinary objects and shapes. At first no particular pattern can be seen, but after some thorough analysis one might notice something that ordinarily would be unnoticeable. The mathematical concepts of number sequences and quadratic functionsreally helped making this investigation a fluid task. Given more time, further investigation could be completed with regard to other possible relationships between triangular numbers and some other geometric shapes such as square numbers or perhaps thetotal number of lines in each stellar. The possibilities are endless and the model in this investigation can be applied to many other aspects of mathematics. Nonetheless, this investigation shows that with tedious analysis and effort, a pattern can be generated regarding even the most mundane objects in life provided there is consistency with the variables.

[1] The diagram was created using GeoGebra. All the diagrams in this paper were created with GeoGebra.

[2] With the aid of GeoGebra