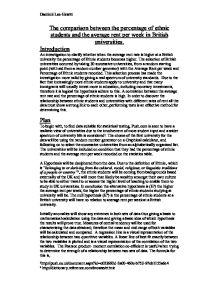 The comparison between the percentage of ethnic students and the average rent per week in British universities.

This also shows that the percentage of ethnic student's averages quite low therefore as the data is further analysed higher percentages of ethnic students could be found at universities with a higher than normal average rent per week, thus it could prove H� to be accepted. Mid-range was then calculated for the percentage of ethnic students, 2(Royal Agricultural College) + 66 (Queen Mary, University of London) = 34% 2 Also shows a low percentage of ethnic students attending university but is substantially higher than the value calculated from the mean. This shows that more tests and analysing will need to be done before a conclusive result is given. In the same way the mid-range of the average rent per week was higher than the mean value, 46.86(University of Northampton) + 147.07(Royal Academy Of Music) = �96.97 2 The increase in both value is because the mid-range uses the two extremes of a set of data, therefore anomalies usually are used in the calculation. In this case the anomalies have caused both mid-ranges to be higher than their calculated mean. The mean is a more accurate calculation as it includes more of the data within it even though it is still affected by the anomalies. ...read more.