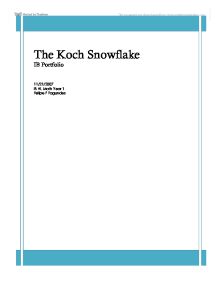 The purpose of doing this investigation is so that we can learn about the different patterns that the Koch Snowflake presents. The simple fact of the Koch Snowflake is a fractal already says a lot about it. A fractal is a figure which repeats itself in smaller scales. For example if stage 12 was looked closer stage two would be found and so would be stage 3 and so on.

In this investigation we explored the patterns that emerge from one stage to the other. We tried to find any patterns for when n= 0,1,2,3 that could be applied to find any other n term. We specifically looked for patterns in N= the number of sides, L= the length of one side, P= the total perimeter, and A= the total area. And in order to come up with these patterns we used many resources like drawing in order to prove that our results were accurate.

L: According to the graph it is possible to see that the successive terms of the sequence start to converge as we go through the stages. It is possible to see that the numbers converge because the common ration between the terms in the geometric sequence is ,1.<1which a convergent factor.  As we move through stages we can see that the difference in the y-axis gets smaller and smaller. Even though the graph does not show this, I would expect the graph to form a line pretty close to straight the higher the stage number is. This probably could be credited to the fact that as we move along through the stages of the sequence the size of each triangle gets smaller, consequently and directly related its side length also gets smaller. Eventually, it will converge because the sides will get so smaller that multiplying it by ,1-3. will give me basically the same result as my previous answer and it is a convergent factor.

In order to get the conjecture for the number of sides I had to analyze my table. At first I could not realize that if I used t1=3 times the common ratio which is 4 to the power of n I would get the formula. So I started by realizing that it was possible to get a recursive formula, since I was able to multiply the previous number in the sequence ( tn-1) by four and get my answer. But since I wanted to get a explicit formula which would allow me to get any term in the sequence I realized that I would need to keep the four since it was the common ratio. After I also realized that it formed a geometric sequence since it had a common ratio. With that in mind I was able to realize I was able to use the standard geometric sequence formula (,𝑡-𝑛=,𝑡-1 ..× ,𝑟-𝑛−1.) with just a slight modification that instead of using n-1 for the exponent I would simply use n. I had to make the modification because the formula starts with t0 instead of t1 and so I had to adjust to the difference by making everything -1 so my t0 would be like t1.

In order to come up with this conjecture, I simply tried to find a common ratio or common difference between the terms. Once I realized that it was geometric sequence not a arithmetic sequence I was able to realized that the common ratio was,1-3.. Since the first term of the sequence was one I also realized that I could leave it out. And once again I made the modification to the geometric sequence formula of putting n instead of n-1 for the exponent of the ratio. I had to make the modification because the formula starts with t0 instead of t1 and so I had to adjust to the difference by making everything -1 so my t0 would be like t1.

Note that for all of the of the conjectures n must be a positive integer it also works with 0 though.

A= As I had previously predicted the values for An will eventually converge because the common ratio is ,1-3.which is a conversion factor. That is the reason why from stage 5 and on the line seems to get straight next to .7.

In conclusion we can finally say that the Koch Snowflake is a geometric figure with many hidden patterns and secrets in it. After extensive analysis, it was possible to create formulas and conjectures which allows for a person to quickly and easily find the Area, Perimeter, Side Length, and Number of sides of each stage of the Koch Snowflake. However, after many patterns were used in order to create the conjectures and the formula, one thing happened in the last step of this investigation. This was the fact that was possible to see that the Area of the fractal converged; however, the perimeter was getting bigger and bigger. So at the end of this extensive investigation one final question can be asked “How can the area of the fractal converge If the perimeter get larger and larger as n increases?”