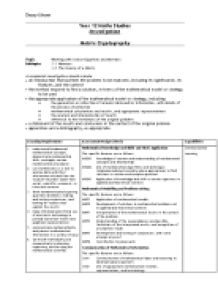 The purpose of this investigation is to explore the various properties and concepts of matrix cryptography.

A completed investigation should include:

First, the following alphanumeric system was chosen. Note that the corresponding digits are not merely a direct substitution in order of letters, but instead, we can rearrange the corresponding digits in some pattern or random order. In this case, the first half of the alphabet is allocated even numbers, while the remaining half is allocated odd numbers. This renders the code tougher to break without the alphanumeric system being provided to the intended reader.

Now, a message, written in English, was created. The message chosen is “IONCANNONREADY”, a quote from the Command and Conquer game series, the ion cannon fires charged particles and causes devastating damage to the enemy base. This message translates to the corresponding numeric code using the system above :
18,3,1 ,6,2,1,1,3,1, 9,10,2,8,23.

This code must now be broken into uniform packets or “chunks” to be coded. It is decided that the chunks will consist of 4x1 matrices. This is as the encoding matrix is a 4x4 and to be multipliable by each packet, the number of columns of matrix A must equal the number of rows of matrix B by definition.

Notice that the two elements are blank*. To fix this, “dummy” letters will be placed into the packets at random only to complete all packets to 4x1 matrices.

Z, digit 25*, was positioned in places of empty elements at random. All packets are now 4x1 and the message matrices and are ready for encoding.

Now the message is in a form that may be encoded, however, the message code at the present state is very straight forward as the digits directly represent the corresponding letters.  A disguise of some kind must be used to give this code additional security by shifting all the values by some scalar quantity.

Using matrix algebra, it can be seen that the original code matrix, A, can be obtained by multiplying the scrambled matrix, B, by the inverse of the scramble matrix used, X-1.

The inverse of the scramble matrix is given. This is the key to decoding the code.

Using the decoding instructions, the code was decoded by a member of the class, Jordan Maguire.