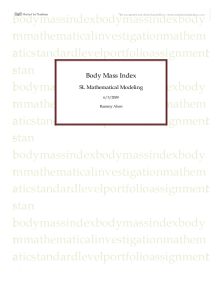 Body mass index (BMI) is a measure of one’s body fat. It is calculated by taking one’s weight (kg) and dividing by the square of one’s height (m).

The table below gives the median BMI for females of different ages in the US in the year 2000.

Using technology, plot the data points on a graph. Define all variables used and state any parameters clearly. 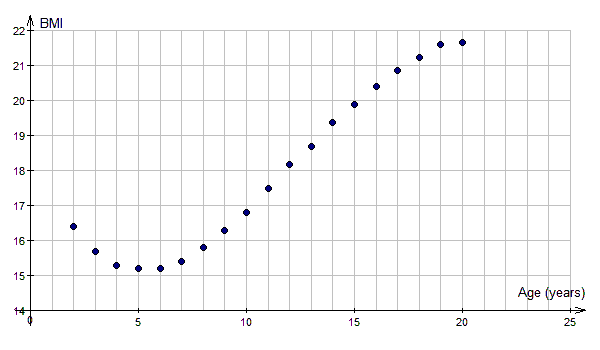 What type of function models the behavior of the graph? Explain why you chose this function. Create an equation (a model) that fits the graph.

Throughout this study, many different types of function models were experimented with. However, the one which models the behavior of the graph the best would be a sine function.

First, we must understand what each variable does:

The equation above was graphed along with the plotted data and there was similarity between the two.

On a new set of axes, draw your model function and the original graph. Comment on any differences. Refine your model if necessary. 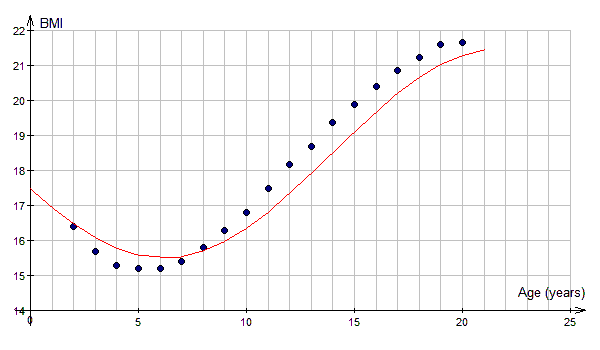 The blue dotted points are the data points from the table on the first page. The red line is the sine function arrived at earlier. Obviously, the line is not perfectly in sync with the plotted data; however, it is reasonably close. After graphing both on the same axes some clear differences can be seen more clearly. For example, first the minimum of the function is higher than the minimum of the data. This can be improved by changing the variable d. By changing d slightly the whole sine function can move down however many units you increase d by. Also the sine function curves off of the plotted data. This can be improved by increasing the frequency of the sine function very slightly.

The red line in this graph represents the same model function as before, and the blue data points are the BMI data points for girls ages 0 to 18 in China. As you can see the data follows a very similar trend to the model; however, the overall BMI of women in China is less than the overall BMI of women in the US. To make the model fit this data the whole sine function model would need to be moved down about half of a unit. 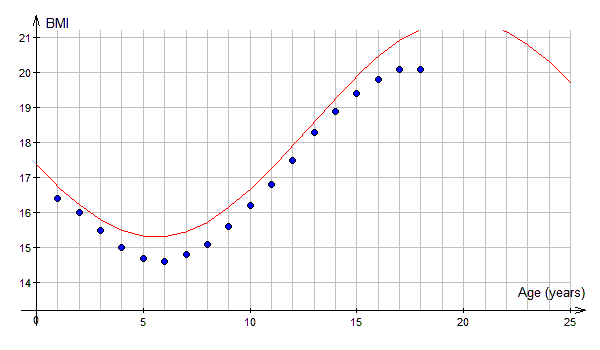 The model function which was concluded earlier looked like the following:

After, refining this function to fit the data from china the variable d was decreased by half of a unit:

By decreasing the variable d by half of a unit, the whole model function undergoes a vertical translation of 0.5 units downwards.

As you can see in the graph above, the refined function fits the data on women from China much better. 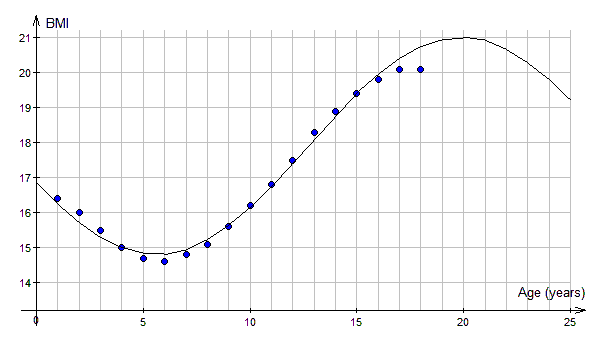 Overall, the models used in this investigation were closely related to the data; however, there is a very limiting problem with the sine model used. The main limitation was seen when estimating the BMI of a 30-year-old woman. Due to the fact that the sine function is recurring after the maximum point (which was around the age of 20), the y value begins to decrease. This is a very important limitation because if the BMI of a woman needs to be estimated the information would neither be reasonable nor reliable.