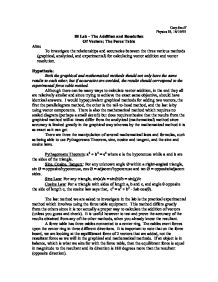 IB Lab - The Addition and Resolution

Of Vectors: The Force Table

To investigate the relationships and accuracies between the three various methods (graphical, analytical, and experimental) for calculating vector addition and vector resolution.

Both the graphical and mathematical methods should not only have the same results to each other, but if accuracies are avoided, the results should correspond to the experimental force table method.

Although there can be many ways to calculate vector addition, in the end they all are relatively similar and since trying to achieve the exact same objective, should have identical answers.  I would hypequivalent graphical methods for adding two vectors, the first the parallelogram method, the other is the tail-to-head method, and the last is by using vector components.  There is also the mathematical method which requires no scaled diagram (perhaps a small sketch) but does requireothesize that the results from the graphical method will at times differ from the analytical (mathematical) method since accuracy is limited greatly in the graphical way whereas by the mathematical method it is as exact as it can get.

Improvements and modifications for the lab include several more procedures that dealt with more than two vectors since it would be interesting to see how that works on the force table.  Also more specifically students should have some sort of background understanding of several geometric formulas, as it seemed that many struggled.  I would also be tempted to do graphical diagrams on larger paper and in larger scale, increasing accuracy significantly.  Nonetheless the lab objective was achieved and my hypothesis stood correct.