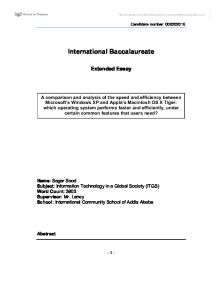 A comparison and analysis of the speed and efficiency between Microsofts Windows XP and Apples Macintosh OS X Tiger: which operating system performs faster and efficiently, under certain common features that users need?

Chapter 3: CD Burning speed 3.1: General Information Compact Discs have held them strong in this technological world for years, whether they are used to hold media, data or software, they have become the standard medium for distributing large quantities of information in a reliable package, as they range from 600MB to 9.6GB. 13 As CD burners have become standard over the past few years, the ability for the user to easily save files to CD has become increasingly necessary. In the past few years, the Compact Disc has completely pushed the Floppy Disk to the list of the endangered species.14 A common CD has the capacity to hold 700MB or more of data, which is equivalent to over 400 floppy disks. Both operating systems include built-in support for burning data to CD-Rs/DVD-Rs (recordable or "write once" compact discs) as well as CD-RWs/DVD-RWs (erase and rewrite).15 The two operating systems can burn the cross-platform compatible ISO-9660 format, though only Mac Tiger writes to that format by default.16 The ISO-9660 is a format officially published by the International Organization for Standardization (ISO) for operating systems to exchange data with CDs without any translation or conversion.17 Windows XP has an additional feature that supports HighMAT format. HighMAT allows the CD burning hardware to read lists of images and music content from the media faster, as well as providing a more convenient navigation system. This feature helps CD/DVD players to read hundreds of music or photo files in a much faster way, eliminating browsing experience for users to be slow and tedious.18 The CD is made up of translucent layers, when laser passes through this layer; it creates dark points on the CD, which are digital pattern that a CD player can read.19 At first, when the files are dragged into the CD Drive, they are actually copied into a temporary folder on the local drive. As soon as the 'Burn CD' button is clicked, these files are created into a separate image file (ISO).20 This doesn't happen in the Mac, the files are directly read from the source path and then written on the disc. ...read more.

Conclusion Since the first computers were introduced, the battle of the operating systems has never stopped. If someone asks the question, 'Which operating system is better?' it is normal to get varied answers. It is fair to say that the differences between these two operating systems don't lie within in the quantity of features each possesses, but more on a users' desire, which furthermore vary accordingly. Both operating systems performed remarkably under the tests. After looking at the test results, it is clear that Windows XP performs faster when it comes to processes like CD burning, which is one extremely vital feature that today's media-influenced world desires. On the other hand, Mac Tiger is no less than Windows XP when it comes to RAM usage and most of all; internet usage takes a huge lead in the race. Based on the results, the Safari 2 performs almost 2 times faster than Internet Explorer. This test is probably the most important as huge majority of users around the world use internet daily. Both the operating systems perform equally well when RAM usage is considered, even though, being the tester, I believe that the Tiger's applications were more efficient and easily accessible compared to Windows XP. Even though Microsoft's Windows XP takes the majority of the market share, users all over the world should not doubt the power, proficiency and potential of Apple's Mac Tiger. There is no doubt that both the operating systems perform significantly well according to their design. Without being biased, and looking at the overall performances of the two operating systems, I myself would recommend the Macintosh Tiger to the general users i.e. users that use the computer system for every day computing because of its ease-in-use and faster features. In conclusion, it is apparent that both operating systems have their own strengths and weaknesses, but in the end, it is always left to the users to decide according to their needs and requirements. ...read more.