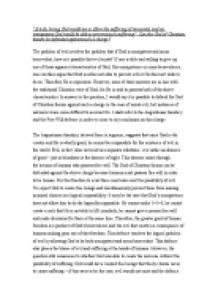 A truly loving God would never allow the suffering of innocents and an omnipotent God would be able to prevent such suffering. Can the God of Christian theism be defended against such a charge?

﻿?A truly loving God would never allow the suffering of innocents and an omnipotent God would be able to prevent such suffering?. Can the God of Christian theism be defended against such a charge? The problem of evil involves the problem that if God is omnipotent and omni-benevolent, how is it possible that evil exists? If one is able and willing to give up one of these apparent characteristics of God, His omnipotence or omni-benevolence, one can then argue that God is either not able to prevent evil or He does not wish to do so. Therefore He is capricious. However, none of these answers are in line with the traditional Christian view of God, for He is said to possess both of the above characteristics. In answer to the question, I would say it is possible to defend the God of Christian theism against such a charge in the case of moral evil, but instances of natural evil are more difficult to account for. ...read more.

This defence also places the blame of evil and suffering at the hands of humans. However, the question still remains as to whether God was able to create the universe without the possibility of suffering. God could have created free beings that freely choose never to cause suffering ? if this were to be the case, evil would not exist and the defence does not stand up. Also, God?s omniscience can be questioned, as people may suggest that God should have known that such freedom would lead to evil taking place in His creation. The Free Will Defence also fails to give a satisfactory account of natural evils. Alvin Plantinga has claimed that natural evils are a result of moral evils carried out by humans, referring to the biblical account of the Fall. However, it seems perfectly reasonable to some that God could act to prevent natural disasters without reducing the importance of human free will. ...read more.

These are merely hurdles in the progression towards eternal life. However, in response to such a claim, people may suggest that the evil that took place during the Holocaust was so wicked that the apparent reward of an eternal life does not seem to justify such torture. If God is so loving, surely he could limit the amount of suffering that has to be incurred, for everyone does not suffer evils to the extent of the Holocaust. Overall, I think it is possible to defend God against this charge in terms of moral evil, which can be said to be caused by humans themselves as a direct consequence of free will. The problem of evil can also be answered through the fact that God allows this to happen so that humans suffer in order to reach the greater good that is eternal life. God is still omni-benevolent in such a case, as He is giving humans the possibility of eternal life once they have overcome the suffering that is contained within the world. ...read more.