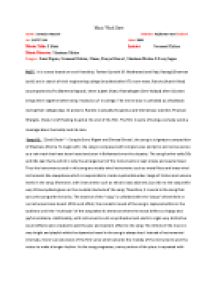 An analysis of the musical elements in the film 'Three Idiots'.

﻿Music Work Sheet Name: Sumaiya Hossain Director: Rajkumar Irani Student no: 210757144 Year: 2009 Movie Title: 3 Idiots lyricist: Swanand Kirkire Music Director: Shantanu Moitra Singers: Sonu Nigam, Swanand Kirkire, Shaan, Shreya Ghosal , Shantanu Moitra & Suraj Jagan PLOT: It is a story based on true friendship. Farhan Qureshi (R. Madhavan) and Raju Rastogi (Sharman Joshi) are in search of their engineering college (modeled after IIT) room-mate, Rancho (Aamir Khan) accompanied by Pia (Kareena Kapoor), when a geek Chatur Ramalingam (Omi Vaidya) after 10 years brings them together after being ?made fun of? in college. The entire story is unfolded as a flashback during their college days. At present, Rancho is actually the genius and the famous scientist, Phunsuk Wangdu. Chatur is left feeling stupid at the end of the film. The film in spite of being a comedy sends a message about humanity and rat-race. Song #1: ?Zoobi Doobi? ? Sung by Sonu Nigam and Shreya Ghosal , the song is a signature composition of Shantanu Moitra. ...read more.

However, in the second interlude of the song, the ornamentation of the instruments are arranged in a way that embellishes the melody creating an echo which is heard as a repetition of the tune played with different instruments. On the other hand the rhythm of the music in the song follows a repeated pattern throughout which controls the movement of the music in adjacent with the vocals. With a fast tempo and layering effect of various instruments in the song, the song can be described to have a solid texture. Lastly the jazz effect of the song becomes very prominent towards the end of the song when the tone of the vocal completely changes to westernized style. In my opinion, the music gives a very retro feeling while the simple lyrics make the song easily hummable. It?s a very foot tapping old westernized song that can make one get up and dance in a happy mood. Song# 2: ?Behti Hawa? : This song is sung by Shaan and accompanied by Shantanu Moitra as backing vocal. ...read more.

Next is "Zoobi doobi", the only song with a female voice. Sung by Shreya Ghoshal with ample support from Sonu Nigam, the track has a retro feel. It is a melodious number that grows on you. "Zoobi doobi" too has a remix version with more contemporary sounds. Then comes "Behti hawa sa tha woh" that has Shaan and Shantanu Moitra behind the mike. It has a long prelude and seems to be a situational track. The poignant, slow number has soft musical backing and is very appealing. Up next is "Give me some sunshine" that includes dialogues by Sharman Joshi and vocals by Suraj Jagan. The song is an unplugged version and will appeal to the younger generation mainly because of the composition and the song's rebel attitude. The album offers a very nice song in "Jaane nahin denge" sung by Sonu Nigam. It gets an edge with a sudden increase in tempo during the course of the song. There is minimal orchestration and focus on vocals. The lyrics are raw and intense. On the whole, the album is a good mix of slow and fast-paced songs. Shantanu Moitra has scored quality music that has melody and generates lots of interest. ...read more.