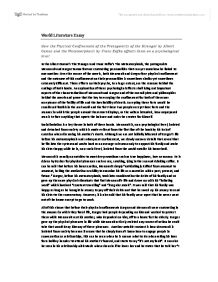 An Example of a Poor Quality World Lit Essay

World Literature Essay How the Physical Confinement of the Protagonists of the Stranger by Albert Camus and the Metamorphosis by Franz Kafka affects them on a psychological level In the Albert Camus's The Stranger and Franz Kafka's The Metamorphosis, the protagonists Meursault and Gregor Samsa feature contrasting personalities that can yet somehow be linked to one another. Over the course of the novels, both Meursault and Gregor face physical confinement and the outcome of this confinement on their personalities is sometimes similar yet sometimes extremely different. These effects on their psyche, to a large extent, are the reasons behind the endings of both books. An exploration of these psychological effects shall bring out important aspects of the characterisation of Meursault and Gregor and of the overall plots and philosophies behind the novels and prove that the key to escaping the confinement for both of them was acceptance of the futility of life and the inevitability of death. Accepting these facts would be considered foolish in the real world and the fact these two people accept these facts and the manner in which the people around them react displays, as the writers intended, how unprepared man is to face anything that upsets the balance and order he creates for himself. Social isolation is a key theme in both of these books. ...read more.

The immediate psychological effects of physical confinement (the first wave) on Gregor and Meursault are that Gregor starts to learn how to use his new physical features and begins the slow process of detachment from humanity the latter of which can be seen where he is able to observe his family as an outsider, "what a quiet life the family has been leading" and where he finds that he is now repulsed by milk, which used to be his favourite drink. Another notable change is that in order to emphasize the fact that Gregor is becoming more insect-like, Kafka changes the words he uses to describe Gregor's movements. In the beginning of the first chapter , it said that Gregor "lugged" and "threw" himself around which sound much more human than insect-like when compared to the words "crawling" and "scuttled" which are used to describe his movements in chapter 2. The immediate effects on Meursault however are that he is deprived of all his usual physical pleasures and he initially longs for them but then calms down and accepts that he can no longer satisfy those needs. He does not notice much until the first night or two until he starts to realize that he is being deprived of the physical stimulants he lives upon when thinking about how his cigarettes were taken away and even though Marie came to visit him, he was separated from her by ...read more.

Stranger, lines such as "one and the same destiny was to select me and thousands of millions of others" and "the others too would be condemned one day" convince me of this. After this meeting, Meursault is finally enlightened, he finds the answer to why he didn't feel he should cry at his mother's funeral and he accepts that his death is inevitable and armed with the knowledge gained by this revelation, he is freed of his physical confinement and thus he proceeds to his execution hoping that people with greet him with "cries of hate" for he knows that they too will eventually face the same end. When Grete slams Gregor's door shut and after he scares the boarders. Gregor is finally convinced that his part in the family's lives is over. His sisters cry of "finally" when his door is slammed shut is evidence to Gregor that the one person he gave up his life for, the person he saved up all his earnings for and that used to always be ready to take care of him was now unable to bear the sight of him. When Gregor realizes that his family, even Grete would be better off when he was gone, he finally succumbs to the inevitability of his removal from their lives and since all emotions connections to them have already been severed, he is easily able to let go of the physical connections. ...read more.