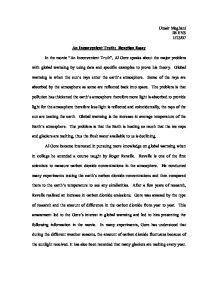 Umair Meghani IB EVS 1/23/07 An Inconvenient Truth: Reaction Essay In the movie "An Inconvenient Truth", Al Gore speaks about the major problem with global warming by using data and specific examples to prove his theory. Global warming is when the sun's rays enter the earth's atmosphere. Some of the rays are absorbed by the atmosphere as some are reflected back into space. The problem is that pollution has thickened the earth's atmosphere therefore more light is absorbed to provide light for the atmosphere therefore less light is reflected and coincidentally, the rays of the sun are heating the earth. Global warming is the increase in average temperature of the Earth's atmosphere. The problem is that the Earth is heating so much that the ice caps and glaciers are melting, thus the fresh water available to us is declining. Al Gore became interested in pursuing more knowledge on global warming when in college he attended a course taught by Roger Revelle. ...read more.

It has been said that he carbon dioxide levels were increased in the medieval era as well as the temperature, but the warming of the earth and the carbon dioxide levels go beyond those levels back in the medieval era. The reason measuring carbon dioxide is vital to figuring global warming is because the more carbon dioxide in the atmosphere causes the temperatures to rise as well because the atmosphere is trapping the sunlight because of the pollution. This pollution absorbs the light in order for the atmosphere to receive enough sunlight. Gore showed some data graphs that depicted the earth's temperature in 50 years. The data described that the graphs have increased exponentially by two times as much in previous years. With some calculation, in the next 50 years, the graph is supposed to increase exponentially by five times. This is outrageous and needs to be controlled if civilizations desire to exist any longer on the earth. ...read more.

This has led to dry land and has also led to the need of precipitation which has occurred in many places, but has precipitated more than needed thus leading to flooding. Another effect of global warming is that evaporation occurs more because of the excessive sunlight received into the atmosphere. Due to this evaporation the land becomes dry for example many parts of Africa. Another tell-tale sign of global warming is the melting of the arctic ice. The arctic ice is the first part that receives sunlight, thus the arctic ice has been drastically melting in the last decade. All these signs have led Al Gore and many scientists to believe that global warming is occurring. The future does not look any better since the humans are reproducing more often than the past "baby-boomers". The baby boomer generation was with 2 billion people, and in less than 100 years later, the population has already reached a little under 7 billion people. We must work hard to control global warming so that your earth stays safe and we stay alive. ...read more.