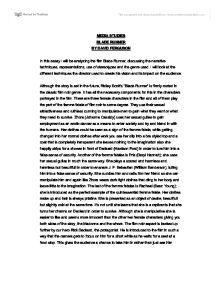 Analyze the film Blade Runner, discuss the narrative techniques, representations, use of stereotypes and the genre used.

MEDIA STUDIES BLADE RUNNER BY DAVID FERGUSON In this essay I will be analyzing the film Blade Runner, discussing the narrative techniques, representations, use of stereotypes and the genre used. I will look at the different techniques the director used to create his vision and its impact on the audience. Although the story is set in the future, Ridley Scott's "Blade Runner" is firmly rooted in the classic film noir genre. It has all the necessary components for this in the characters portrayed in the film. There are three female characters in the film and all of them play the part of the femme fatale of film noir to some degree. They use their sexual attractiveness and ruthless cunning to manipulate men to gain what they want or what they need to survive. Zhora (Johanna Cassidy) uses her sexual guiles to gain employment as an erotic dancer as a means to enter society and try and blend in with the humans. Her clothes could be seen as a sign of the femme fatale, while getting changed into her normal clothes after work you see her slip into a bra styled top and a coat that is completely transparent she leaves nothing to the imagination also she happily strips for a shower in front of Deckard (Harrison Ford) in order to lure him into a false sense of security. Another of the femme fatales is Pris (Daryl Hannah); she uses her sexual guiles in much the same way. ...read more.

it has a beginning, a middle and a happy ending and along with Barthes hermeneutic code there is also a theory by Tzvetan Todorov otherwise known as Todorov's Hollywood narrative. This is the basic concept that the narrative starts with a state of equilibrium where there is a period of calm. An outside force disrupts the state of normality i.e. the equilibrium. This is known as the disruption and once the outside force has been fought and defeated, order will return and a new equilibrium will be established. This is called the resolution. The establishing shot is the equilibrium, leon shooting Holden becomes the disruption as we are introduced to the replicants and when the fight between Deckard and Roy Batty (Rutgar Hauer is over and Deckard manages to escape with Racheal there is a resolution to the story. Another use of narrative that Scott uses is stereotypes; the film is littered with them. Rutgar Hauer plays the military man, strong decisive, and has leadership qualities. His companions Leon, Zhora and Pris all fall into the stereotype category also. Leon plays the soldier/hardened criminal. You can see this in the way he talks to Deckard as they are fighting. At one point he wakes him from unconsciousness only to say "wakeup, time to die". You also see this part of his nature in his interview with Holden. When he is sure he is about to be caught the guns come out blazing. He has no remorse for his actions and his anger is all the justification he needs to kill. ...read more.

to be a replicants, a life of great wonder with sights and memories most people will never have and finally a life wasted, ending too soon. He dies with dignity and shows more humanity than any other character in the film. Gaff also shows a sign of humanity, at the end of the film he shouts to Deckard "it's too bad she won't live, but then again who does". Gaff has decided to let Racheal live so she and Deckard can be together for the short time they have, he knows it won't last forever. Blade Runner is an extremely well written and directed film and would have been new and more than exciting enough to hold the audiences attention. Ridley Scott managed to create a believable vision of the future along with a story within a story. Not only that the film is so well put together that there is the possibility of further story lines within the film e.g. is Deckard a replicants, how could he love a machine if he wasn't or maybe they were all replicants, there was no real sign of life in the city, al the humans have left for off world colonies, maybe they were just left there to die while Tyrell plays with his toys or maybe even Tyrell has made replicas of himself. The possibilities are endless. The film itself was made produced before the use of digitally enhanced special effect were readily available which to my mind says that whether the viewer liked or disliked the film, Ridley Scott's accomplishments have to be recognized and applauded. ...read more.