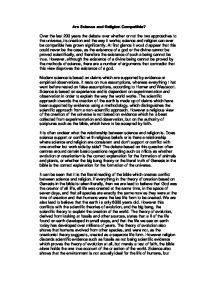 Are Science and Religion Compatible?

Are Science and Religion Compatible? Over the last 200 years the debate over whether or not the two approaches to the universe, its creation and the way it works; science and religion can ever be compatible has grown significantly. At first glance it would appear that this could never be the case, as the existence of a god or the divine cannot be proved scientifically, and therefore the existence of such a being cannot be true. However, although the existence of a divine being cannot be proved by the methods of science, there are a number of arguments that contradict that this view disproves the existence of a god. Modern science is based on claims which are supported by evidence or empirical observations. It rests on true assumptions, whereas everything that went before rested on false assumptions, according to Horner and Westacott. Science is based on experience and is dependent on experimentation and observation in order to explain the way the world works. The scientific approach towards the creation of the earth is made up of claims which have been supported by evidence using a methodology, which distinguishes the scientific approach from a non-scientific approach. ...read more.

days, and that all species are exactly the same now as they were at the time of creation and that humans were the last life form to be created. We are also lead to believe that the earth is only 6000 years old. However this conflicts with the scientific theories of evolution, and the big bang, the scientific theory to explain the creation of the world. The theory of evolution, derived from looking at fossils and other sources, states that all of the life found on earth developed in small steps, and that the life we see on earth today has developed over millions of years. The theory of evolution also shows that humans evolved from other species, and were not, as the creationist theory suggests, created as a separate life form. However religion discards scientific evidence such as fossils as not being scientific evidence which proves the theory of evolution at all, but merely a test of faith, the bible alone holds the one true account of the creation of the world. Science also shows that the environment is not actually ideal for the life of humans, but humans have adapted to make life on earth possible. ...read more.

Science can provide no explanation as to why the universe was composed the way it was before the big bang occurred, and can only provide an explanation as to how the big bang occurred, the universe being how it was. Hunt said "even if the whole universe consisted of organic soup, the chance of producing the basic enzymes of life by random processes without intelligent direction would be approximately one in 10 with 40 zeros after it ... Darwinian evolution is most unlikely to get even one polypeptide right, let alone the thousands on which living cells depend for survival." This is to say that the possibility of the universe being created by accident is almost negligible, and science cannot provide a complete explanation as to why this occurred, and as a result it is necessary to look beyond the things that science can tell us to find a complete explanation for the formation of the universe, and the simplest solution to this problem is the existence of a god. These arguments show that the world of scientific discovery is in fact a strong indicator of the existence of a god, and that science is merely discovering and explaining the things that god created. ...read more.