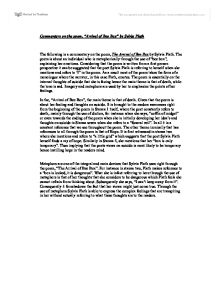 Commentary on the poem, "Arrival of Bee Box" by Sylvia Plath The following is a commentary on the poem, The Arrival of Bee Box by Sylvia Plath. The poem is about an individual who is metaphorically through the use of "bee box", explaining her emotions. Considering that the poem is written from a first person perspective it can be suggested that the poet Sylvia Plath is referring to herself when she mentions and refers to 'I" in the poem. As a result most of the poem takes the form of a monologue where the narrator, in this case Plath, emotes. The poem is essentially on the internal thoughts of suicide that she is facing hence the main theme is that of death, while the tone is sad. Imagery and metaphors are used by her to emphasize the points of her feelings. In the, "Arrival of Bee Box", the main theme is that of death. Given that the poem is about her feeling and thoughts on suicide. It is brought to the readers awareness right from the beginning of the poem in Stanza 1 itself, where the poet constantly refers to death, mainly through the use of diction, for ...read more.

Subsequently she says, "I can't keep away from it". Consequently it foreshadows the fact that her views might just come true. Through the use of metaphors Sylvia Plath is able to express the complex feelings that are transpiring in her without actually referring to what these thoughts are to the readers. Sylvia Plath also makes use of imagery and allusions for the most part in this poem, The Arrival of Bee Box. To help the readers understand the flow of thoughts and emotions of the character (she) is going through. In the first stanza the readers are aware that Sylvia Plath has not completely understood that the emotions she is going through is infact one of suicidal. Hence a distorted image is created for the reader through sentences such as, "it was the coffin of a midget". Towards the second stanza when she has realized that she cannot let her thoughts go away. She once again makes use of imagery to further reinstate that through the line, "There are no winds so I can't see what is there." Allusions on the other hand are used towards the end of the box to express how she can not let these thoughts be out in the open. ...read more.

Lastly the structure that Sylvia Plath makes use of right from Stanza one helps the readers understand exactly what the character is feeling. The structure is also important for the reason that it shows the progression of thought within the character. For instance the very first line of the poem she says, "I ordered this, clean wood box". However towards the fourth stanza when she starts feeling scared she says "How can I let them out". Despite the fact that it is ironical that she ordered the box and now does not want to open it. The reader is able to understand the bigger message of the poet that she is feeling scared. The reader is able to comprehend this fact solely because of the structure in which it is written. In conclusions this poem, The arrival of Bee Box is mainly an attempt by Sylvia Plath to express the dark thoughts of suicide that she is having without exposing them directly to the readers in a straightforward manner. To help emphasize this situation better to the readers, Sylvia Plath the poet uses herself as a character and also makes use of literary techniques and devices such as structure, tone, metaphors, allusions and imagery. ...read more.