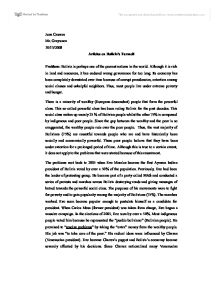 Juan Casares Mr. Grzywacz 10/13/2008 Articles on Bolivia's Turmoil Problem: Bolivia is perhaps one of the poorest nations in the world. Although it is rich in land and resources, it has endured wrong governance for too long. Its economy has been completely devastated over time because of corrupt presidencies, extortion among social classes and unhelpful neighbors. Thus, most people live under extreme poverty and hunger. There is a minority of wealthy (European descendant) people that form the powerful class. This so-called powerful class has been ruling Bolivia for the past decades. This social class makes up merely 25 % of Bolivian people whilst the other 75% is composed by indigenous and poor people. Since the gap between the wealthy and the poor is so exaggerated, the wealthy people rule over the poor people. Thus, the vast majority of Bolivians (75%) are resentful towards people who are and have historically been socially and economically powerful. These poor people believe that they have been under extortion for a prolonged period of time. Although this is true to a certain extent, it does not apply to the problems that were started because of this resentment. ...read more.

Two people died and more than two hundred were wounded. It became clear that the problem was just starting. After a series of wrong decisions and no visible solutions regarding Bolivian economy, Evo's supporters began to foster their resentment towards the wealthy people because they believed that Evo's plans were not effective because the wealthy people did not abide. Thus, the real problems started. Confrontations became much more intense and bared an increasing number of casualties from both sides. In a lapse of one year, Santa Cruz de la Sierra (city with majority of habitants opposing Evo's reforms) performed two petitions for autonomy with more than two million people voting against Evo's reforms. Evo ignored the petitions stating that he could change the legislature in his favor. This was extremely controversial and it cultivated more hatred among the opposition. Furthermore, Evo's nationalization policies strained relations with Bolivia's neighbors, Brazil, Argentina, and Chile. These countries exported most of the gas from Bolivia, thus, the nationalization of oil companies halted the businesses. Bolivia's economy worsened. In the present Bolivia attempts to fight its economic disaster with Evo in the head. ...read more.

Furthermore, Evo's nationalization policies hurt Bolivia's "oil and gas" relations with its neighboring countries. UN involvement: The UN is not involved in the turmoil although it should become involved before the problem aggravates. The problem has not yet developed into a war, but, if it is not solved soon, it could become Bolivia's first civil war. Therefore, the United Nations should send peacekeeping troops at least to prevent further confrontations. Both Bolivian sides (the wealthy and the poor) are armed. The poor people directed by Evo Morales are supported by Chavez and his troops and the wealthy people are supported by businesses. There have been major confrontation were people from both sides have been massacred. Santa Cruz de la Sierra, Sucre, and La Paz have been major confrontation sites. In Santa Cruz, confrontations have reached limits: airports were taken over by the military two times and troops have been sent from Venezuela to fight against the opposition. The problems are still increasing. The habitants of Santa Cruz have asked for autonomy (economic independence) two times and Evo has ignored their calls. Furthermore, Evo's supporters' hatred is fostered by decades of resentment towards the wealthy people. If the UN does not become involved soon, perhaps it will be too late to stop the imminent civil war. ...read more.