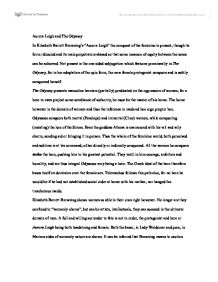 Aurora Leigh and The Odyssey

Aurora Leigh and The Odyssey In Elizabeth Barrett Browning's "Aurora Leigh" the conquest of the feminine is present, though its form ridiculed and its male perpetrators abased so that some measure of equity between the sexes can be achieved. Not present is the one sided subjugation which features prominently in The Odyssey, for in her adaptation of the epic form, the now female protagonist conquers and is subtly conquered herself. The Odyssey presents masculine heroism (partially) predicated on the oppression of women; for a hero to even project some semblance of authority, he must be the master of his home. The home however is the domain of women and thus the inference is made ad hoc ergo propter hoc. Odysseus conquers both mortal (Penelope) and immortal (Circe) women, while conquering (resisting) the lure of the Sirens. Even the goddess Athena is enamoured with his wit and wily charm, sending aid or bringing it in person. Thus the whole of the feminine world, both perceived and sublime is at his command, either directly or indirectly conquered. ...read more.

Female strength however, is sometimes found in the most unlikely of places, among the denizens of brothels and hovels, in Mariam. She, having been abandoned by Romney, denies him marriage when he returns many years later proposing this. Thus Browning alters form, in her poetic justice, Romney must be rebuked, and soundly so. Another Greek dogma is abandoned with her differentiating between love and rape, love being an entity that cannot be forced upon one party. Aurora is her own woman, writing poetry for a living, and even acting as a benefactor to Mirian, a decidedly male role. Love is not conquest, nor conquest love she says: "When we learn to lose ourselves, and melt like white pearls in another's wine...," equating love with a soft stupor, yet one for the better, where the self of one becomes the whole of two. Aurora struggles to assert herself, yet does so, even though the hostile forces of her aunt and Romney try to hold her back. ...read more.

Hers was the age of Victoria, of prudish behaviour, where one slip, one impropriety meant one's end. Yet at the same time, there was a surplus of women, and as often follows, a proliferation of prostitution. Marian herself becomes one, but Browning meant her not to be viewed as vile, but rather with compassion. Society made the woman, and her strength in persevering should be glorified rather than her actions vilified. In Browning's narrative, it is not only the women who are humbled, but also the men. Romney did not see clearly what Aurora deserved, and thus he is blinded literally so that he can accept and acknowledge what she means to him. He "mistook his own heart, and that slip was fatal...", as did Aurora, and thus they both conquer each other, entering a relationship of equals. The feminine is conquered in Aurora Leigh, but not in the sense that it was in The Odyssey. Women as heroes can agree to be conquered, once both they and their lovers have grown morally, and shed the false skin that is the collection of judgements society makes of them, and in turn expects them to believe. ...read more.