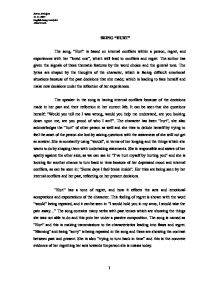 BEING "HURT" The song, "Hurt" is based on internal conflicts within a person, regret, and experiences with her "loved one", which will lead to conflicts and regret. The author has given the signals of these thematic features by the word choice and the general tone. The lyrics are shaped by the thoughts of the character, which is facing difficult emotional situations because of the past decisions that she made; which is leading to face herself and make new decisions under the reflection of her experiences. The speaker in the song is having internal conflicts because of the decisions made in her past and their reflection in her current life. ...read more.

Her tries are being seen by her internal conflicts and her past, reflecting on her present decisions. "Hurt" has a tone of regret, and how it effects the acts and emotional acceptations and expectations of the character. This feeling of regret is shown with the word "would" being repeated, and it can be seen in "I would hold you in my arms, I would take the pain away..." The song contains many verbs with past tenses which are showing the things she was not able to do and this puts her under a passive composition. The song is named as "Hurt" and this is making transmissions to the characteristics leading into flaws and regret. ...read more.

Her past is the reason of her regretting and it is wrapping her up with conflicts and they are acting upon her decisions and the situation that she is in today. The character is kind of getting effected by flashbacks and her "yesterday". The general motifs of missing and regret are effecting what she is aiming; wishing today and this can be seen from the tone of the author. In the song, the character is going through a period in her life, where she faces herself because of her past decisions leading into regrets and she is able to make new judgments with the awareness of her experiences. Listeners witness the mood of the speaker of the song with the help of thematic features which reflect the melancholic state that she is in. ?? ?? ?? ?? Burcu Erdogan 14.11.2007 English Song Analysis -Final Draft- 1 ...read more.