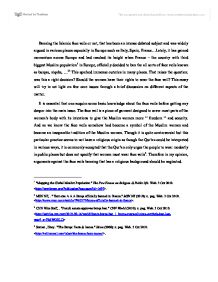 Burqa ban. Banning the Islamic face veils or not, that has been an intense debated subject and was widely argued in various places especially in Europe such as Italy, Spain, France.

Banning the Islamic face veils or not, that has been an intense debated subject and was widely argued in various places especially in Europe such as Italy, Spain, France...Lately, it has gained momentum across Europe and had reached its height when France - the country with third biggest Muslim population1 in Europe, officially decided to ban the all sorts of face veils known as burqas, niqabs, ...23 This sparked immense outcries in many places. That raises the question: was this a right decision? Should the women have their rights to wear the face veil? This essay will try to set light on few core issues through a brief discussion on different aspects of the matter. It is essential that one acquire some basic knowledge about the face veils before getting any deeper into the main issue. ...read more.

To some extent in my opinion, it is very true because it seems the majority who wears face veils are either told to wear or forced to wear though most of them has a tendency to claim that they have an independent choice to choose to wear or not which is actually a rather rare case. Also, many countries have developed a stronger Islamophobia after the 911 terrorist bombing 5 thus they are now more cautious and the security is getting tighter, and so banning the face veil can be seen as a good option since it would more or less, prevent criminals to lurk under the cover of a Muslim woman6. However there are also numerous counter-arguments such as the banning of face veils is a sign of racism because they are targeting on Muslims and also they are stripping away the freedom of the Muslim women to wear what they want7 and lastly it expose Muslim women to vulnerabilities which can be true to some extent. ...read more.