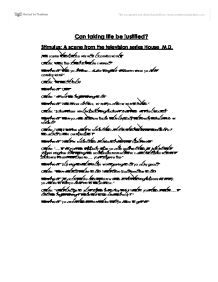 Can taking life be justified?

Can taking life be justified? Stimulus: A scene from the television series House M.D. (The scene takes place inside a confessional) Chase: "Bless me father for I have sinned" The Priest: "take your time...... How long has it been since you last confession?" Chase: "I killed a man" The Priest: "Oh!" Chase: "it was the right thing to do" The Priest: "Who lives or dies, is not you decision to make." Chase: "Sometimes in an operating room it feels like it, I'm a Doctor." The Priest: "Then you should know more than anybody that every human life is sacred." Chase: "Why? Tell me what is sacred about a dictator that kills hundreds of thousands of his own people!" The Priest: "What is sacred about a Doctor who kills a patient?" Chase: "..... Is it just the slippery slope you are worried about? Afraid that forgiving me for killing the worst person on earth is such a bad president? I promise I won't tell anyone..... just forgive me" The Priest: "Saying ten hail Marys isn't going to do you any good." Chase: "Then what do I have to do? What does God need me to do? The Priest: "You can't have absolution without first taking responsibility; you have to turn yourself in to the police." Chase: "What and go to jail for the rest of my life? ...read more.

Christians would argue that if god exists, he created man and that only he has the right to take someone's life, and that the act of taking his life cannot be justified because it is not our right to take. This means that in the eyes of god we would be as bad as the criminal because we are taking a life that we do not have claim to. You could counter this by quoting "an eye for an eye" from the bible, and by saying that the criminals life should be taken as the price for his crimes, but such an approach to religion is commonly thought to be out dated. Some would argue that if there isn't a god then there is nothing to say that the government doesn't have the right to kill criminals as a form of punishment and that if it will benefit society then it is the right thing to do. But I would argue that just because god doesn't exist the government does not gain the right to take someone's life. This is because if god does not exist then the only thing a person has is their mortal life and at the end of it there is nothing more. This means that by killing someone you are taking away everything they have and everything they will ever have, in my opinion this is close to the worst thing you can do to someone and that the government has no right to do such a thing. ...read more.

This is due to several things, I believe that life is special with or without a god and that you should not take steps to end it, also because I believe that death brings nothing good to anyone and because I believe that even the worst existence is better than having nothing. But I also believe that I have no right to tell someone else what to do with their own life, and that if they believe that it will make them happy I have no right to try and stop them. So in a way I believe that a person should get to control what happens to their body, so if they are suffering enough I believe that it may be justifiable, but I refuse to believe that someone's death can be a good thing. In conclusion I believe that this is a very difficult issue, one that holds much importance. In my opinion I do not believe that taking life can be a good thing because no matter how bad someone's life is, it is infinitely better than being dead. This is because if god doesn't exist then when you die there is nothing and something is infinitely greater than nothing. Also I believe that no one has the right to claim the life of another person and that if a life must be took, that it is merely the lesser of two evils, only in this way can it be justifiable. ...read more.