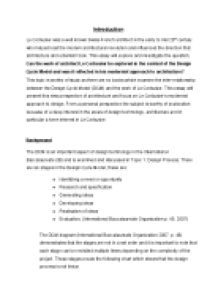 Can the work of architect Le Corbusier be explored in the context of the Design Cycle Model and was it reflected in his modernist approach to architecture?

﻿Introduction Le Corbusier was a well known Swiss-French architect in the early to mid 20th century who helped lead the modern architectural revolution and influenced the direction that architecture and urbanism took. This essay will explore and investigate the question; Can the work of architect Le Corbusier be explored in the context of the Design Cycle Model and was it reflected in his modernist approach to architecture? This topic is worthy of study as there are no books which examine the inter-relationship between the Design Cycle Model (DCM) and the work of Le Corbusier. This essay will present this new perspective of architecture and focus on Le Corbusier?s modernist approach to design. From a personal perspective the subject is worthy of exploration because of a deep interest in the areas of design technology, architecture and in particular a keen interest in Le Corbusier. Background The DCM is an important aspect of design technology in the International Baccalaureate (IB) and is examined and discussed in Topic 1: Design Process. There are six stages in the Design Cycle Model, these are: 1. Identifying a need or opportunity 2. Research and specification 3. Generating ideas 4. Developing ideas 5. Realisation of ideas 6. Evaluation, (International Baccalaureate Organization p. 45, 2007) The DCM diagram (International Baccalaureate Organization 2007, p. 46) demonstrates that the stages are not in a set order and it is important to note that each stage can be revisited multiple times depending on the complexity of the project. These stages create the following chart which shows that the design process is not linear. ...read more.

Many of Le Corbusier?s ideas and research opportunities stemmed from his apprenticeships with other architects such as Auguste Perret, Josef Hoffmann and Peter Behrens. For example one of his mentors, Auguste Perret, was the French pioneer of reinforced concrete which demonstrates that the impact of working with Perret influenced Le Corbusier?s decision to add concrete to his basic pleasures specification list. Josef Hoffmann through functional clarity and abstract purity also influenced Le Corbusier to design using grids and squares and can be seen in his buildings such as the Casa Curutchet. Le Corbusier was also influenced by Peter Behrens who was the pioneer of industrial design in the area of buildings. His works used materials such as concrete brick and glass, all of which are seen to be used by Le Corbusier. Through working with the above architects and designers Le Corbusier undertook research using his teachers and instructors as a source to add to his own design ideas and specifications. These aspects of design can be seen in Le Corbusier's works where his projects have good function but are not over complicated. This information supports the argument that the DCM is an effective way of explaining the processes that Le Corbusier took and that it influenced the direction of his approach to modern architecture. Generating ideas: The generating ideas stage of the DCM involves many different methods of finding and gathering ideas. The Design Technology syllabus for the IB states that; the generating ideas aspect involves divergent thinking1 (International Baccalaureate Organization 2007, p.162) ...read more.

By using these supports not as many walls are necessary meaning that there is more open space. Furthermore this relates to his idea of basic pleasures, with space being one of them. This space can also be seen in the living room of the Villa Savoye in the photograph below. Apart from the creation of space, living room design also demonstrates the use of horizontal, ribbon windows. This corresponds with Le Corbusier’s concepts of the basic pleasures and allows people within the building to appreciate the greenery, the trees and their surroundings. The Villa Savoye demonstrates many of the ideas that Le Corbusier has applied to his architecture and buildings. Other buildings that Le Corbusier has applied the five points of architecture to are; the Suisse Pavillion, the Casa Curutchet, Sainte Marie de La Tourette and the Unite Housing blocks. The application of Le Corbusier's artificial site or flat also became a realisation and can be seen through buildings such as Unité d'Habitation in Marseille. This building is an excellent demonstration of Le Corbusier's application of artificial sites, and it includes the use of pilotis, horizontal windows and a roof garden, which can be seen in the images below. These buildings greatly demonstrate the application of Le Corbusier's developed solutions into a real life situation and shows that the DCM is reflected in his modern architecture. He went on to use these principles with other project including his approach to the re-designing of Chandigarh in India. Consequently this builds and supports the argument that the DCM can be used effectively to understand Le Corbusier work and his modernist approach to architecture. Unité d’habaitation design (above) and realisation of the solution (right) ...read more.