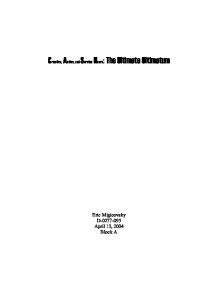 Creative, Active, and Service Hours: The Ultimate Ultimatum Eric Migicovsky D-0277-093 April 13, 2004 Block A The extraordinarily important Creative, Action and Service volunteer component of the International Baccalaureate Diploma Programme has forever ameliorated my personal experience of life. Prior to my inauguration into the glamorous field of the International Student, I rarely participated at all in school or community based activities. On a normal basis, my sole pursuits comprised of sports, such as soccer and ultimate and/or clubs at my erstwhile locale of lofty learning, the High School of Kitsilano. I entered the Creative, Active and Service environment empty-headed, and open-minded, ready to embrace the wonderful challenges that it would bestow upon my ever-deserving psyche hungering for personal growth and enrichment. My personal goals for the Creative, Active, and service increasingly important component were basically to disintegrate those preconceived boundaries I held that blocked me from participating in school activities, and instead, to integrate into the school environment and participate heavily in everything to which my involvement would be of benefit. I believe that through the activities, clubs and teams, the involvement in which I will detail in the coming paragraphs, I have clearly enriched my life, and helped enrich the lives of others, to a much higher degree than before my entrance into the International Baccalaureate Diploma Programme. ...read more.

Combining strength with my Komrade Anthony Wray, we took on the position of the United States of America for a mock United Nations event in defending its foreign policies relating to the use of land mines in war-zones. This club helped me further my comprehension of the world stage of politics and explore the various opportunities that I can examine in later life. This year, I continued with the Model United Nations Club but supplemented it with a trip to the Vancouver Youth Parliament. This group of committed young peoples discussed over a weekend many issues that face the youth of Vancouver, and proposed new bills that further the status of youth in society. It really gave me an excellent view of the Canadian parliamentary system, as it was fully based on the real workings of parliament, right down to the Speaker and questions period. Moving onto the Active component of my Creative, Active and Service programme, I mainly continued with the well founded activities in which I have been participating for several years. I continued playing defence for my local soccer team, the Point Grey Mustangs. This entailed practicing one to two times per week, combined with a game every week for the duration of the season. ...read more.

I also found that participating in these new pursuits helped me fit into my new school. Since I entered Sir Winston Churchill Secondary School in grade 11, I predicted that many groups of people had already formed, sometimes excluding newcomers. Instead, I managed to infiltrate these strongholds under the guise of Creative, Active and Service endeavours. This helped me adjust and therefore socially contribute more to my new and important community of super-capable and highly intelligent peers. Throughout the two years of my Creative, Active and Service programme, I naturally found a balance between the three areas competing for my time and focus. I maintained a strong involvement in sports while creating time to play a part in the many school-based interests I held while forming new interests and continually challenging myself. Ultimately, it seems as if my Creative, Active and Service programme has been quite beneficial, not only to me, but indirectly to the whole community at large. Since the activities that I have participated in over the last two years have had such a large effect on me, I honestly believe that there is a high possibility that I will seriously consider promptly continuing with most of the activities in the near future, such as at university. Word Count: 1,283 succinctly well-chosen words ?? ?? ?? ?? Migicovsky D-0277-093 - 4 - ...read more.