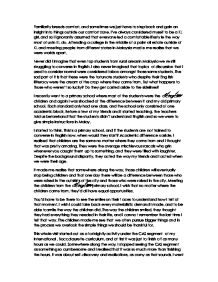 Familiarity breeds comfort, and sometimes we just have to step back and gain an insight into things outside our comfort zone. I've always considered myself to be a KL girl, and so I ignorantly assumed that everyone led a comfortable lifestyle the way most of us in KL do. Attending a college in the middle of a palm oil estate outside of KL and meeting people from different states in Malaysia made me realise that we were worlds apart. Never did I imagine that even top students from rural areas in Malaysia were still struggling to converse in English. I also never imagined that topics of discussion that I used to consider normal were considered taboo amongst those same students. ...read more.

I started to think. This is a primary school, and if the students are not trained to converse in English now, when would they start? Academic differences aside, I realised that children are the same no matter where they come from and I thought that was pretty amazing. They were the average mischievous rascals who grin whenever you caught them up to something, and they were filled with laughter. Despite the background disparity, they acted the way my friends and I acted when we were their age. It made me realise that somewhere along the way, those children will eventually stop being children and that one day there will be a difference between those who were raised in the outskirts of the city and those who were raised in the city. ...read more.

This whole visit started out as a fortnightly activity under the CAS segment of my International , Baccalaurette curriculum, and at first it was just to finish off as many hours as we could. Somewhere along the way, I stopped seeing the CAS segment as something so cumbersome and I realised that it was so much more than finishing the hours. It was about self-discovery and realisations, as corny as that sounds. I went to SK Bukit Tadom, Banting under a community service program to teach the students, but I ended up learning more than I taught. It was a modest school with only six classes, one for each standard, but it did the honor of opening the eyes of a few city raised teenagers. ...read more.