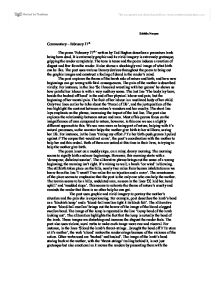 Commentary on February the 17th

Krithika Narayan Commentary - February 17th The poem 'February 17th' written by Ted Hughes describes a premature lamb being born dead. It is extremely graphic and its vivid imagery is extremely grotesque, gripping the reader completely. The tone is tense and the poem induces a reaction of disgust and fear from the reader. It also shows a shockingly real image of what birth can be like. The poet uses various literary devices throughout the poem to bring out the graphic images and construct a feeling of dread in the reader's mind. The poet explores the theme of the harsh side of nature and birth, and how new beginnings can go wrong with fatal consequences. The pain of the mother is described vividly. For instance, in the line 'So I kneeled wrestling with her groans' he shows us how painful her labour is with a very auditory sense. The last line 'The body lay born, beside the hacked-off head' is the end of her physical labour and pain, but the beginning of her mental pain. The fruit of her labour is a mutilated body of her child. Only two lines earlier he talks about the 'Parcel of life', and the juxtaposition of the two highlight the contrast between nature's wonders and her cruelty. ...read more.

These images are disturbing and increase the disgust the reader feels. The poet also uses violent, aural verbs to make each image more raw and visceral. For instance, in the lines 'Sliced the lamb's throat-strings...brought the head off // To stare at it's mother', the verb 'sliced' makes the reader cringe because of the violence of the action. Other verbs used are 'hacked' and hauled'. The image of the lamb's head staring back at the mother, with the 'throat-strings' trailing behind it, is not just grotesque but also emotional as it moves the readers by presenting them with the mother's emotional pain of seeing her child's head in front of her. At the end when the lamb comes out, behind him trails 'yolk-yellow, // Parcel of life // In a smoking slither of oils, soups and syrups.' This metaphorically indicates a broken egg, something that could have been a new life and is now a mess of 'oils, soups and syrups'. The alliteration of the last line tends to cause a sense of nausea in the reader. The tone of this poem is harsh and brutal. It portrays brilliantly the emotional and physical pain of stillbirth. The poet only ever refers to the sheep as a 'mother', which makes our relationship with the sheep more intimate. ...read more.

The use of the pronoun 'he' also conveys the narrator's sadness at the lamb's death. He then however switches back to using 'it' as seen in the monosyllabic line 'Till it came'. The short sentence conveys the shock that the poet feels. It seems to have given way suddenly and now it is the end of his and the mother's labour. The narrator's close relationship with the mother is seen in the phrase 'the birth push and the push of my thumb'. The juxtaposition and repetition of the different 'pushes' highlight the closeness of the two creatures. It also shows the narrator is doing all in his capacity to save the mother's life. The poem is a visceral, sometimes disgusting, poem that successfully captures the readers' interest and grips their imaginations. Hughes is blunt and describes his experience just as he experienced it, without any beating about the bush. This is similar to the style he uses in 'Pike' and 'Birth of a Rainbow'. The poem explores themes such as nature's cruelty and human involvement in nature's processes and presents the poet's view on each one. The imagery is dense, graphic and detailed and the themes are clearly visible throughout the poem. Also the narrator's personal involvement further captures the reader. It is a brilliant poem, which embodies Hughes' writing style and manner of expression. ...read more.