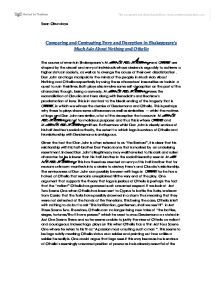 Whilst he hasn't blatantly accused Cassio and Desdemona of infidelity, much unlike Don John's blunt proclamations, he has already done enough damage to allow Othello's mind to race. Indeed Iago continues to be disingenuous thus fuelling Othello's suspicions, and we start to see the extent to which Othello is being deceived when he says, "And for I know thou'rt full of love and honesty." Furthermore, lines in this scene are often split between Iago and Othello. These lines mostly begin with Iago and are finished by Othello and this represents the fact that at this stage, Iago only needs to insinuate to Othello that there is some infidelity occurring, who will then complete the line by jumping to conclusion or by interrogating Iago further. Iago continues his act of honesty by even urging Othello to avoid being jealous saying, "O beware, my lord, of jealousy/It is the green-eyed monster which doth mock/The meat it feeds on." Even though Iago hasn't explicitly stated that Cassio and Desdemona are having an affair, he is only serving to encourage Othello's transformation into this green-eyed monster. Othello's main downfall is the fact that, he often deceives himself and has allowed himself to be almost entirely consumed by Iago's manipulations. Othello urges Iago to "Give me the ocular proof" and develops an obsession with this as he seeks to confirm his beliefs about Desdemona's infidelity. Therefore, when Iago lies that he has seen Cassio wipe his brow with the handkerchief that Othello had given to Desdemona, he is further convinced that she is having an affair. This handkerchief plays a key role in Othello's downfall and Desdemona's death as this was the first gift that he gave to her and is a symbol of his love for her. However, a only a short time before it was figuratively dangled by Iago before Othello, Desdemona had applied the handkerchief to Othello's head due to his headache and only dropped it when he left. ...read more.

The play has in a sense relied heavily on Othello being, metaphorically speaking, blinded by Iago. This bloody conclusion is in contrast to the more positive conclusion of Much Ado About Nothing in which having been summoned to what is in effect a second wedding party, a repentant Claudio is summoned under the pretence that he is to marry another of Leonato's nieces. He had previously acknowledged the fact that he had been deceived in an epithet to Hero's supposed tomb so when it is revealed that Hero is indeed alive, he begs for forgiveness. One must wonder why Hero willingly marries Claudio when he has allowed himself to be deceived to a point where he has no qualms in disgracing her in public. Furthermore, Benedick and Beatrice still insist on deceiving themselves when they both say loudly declare that they do not love each other. However, Claudio, Hero and indeed the audience know that this isn't the truth and they finally profess their love for each other for others to hear. In the end, unlike Iago, Don Pedro has failed as he is now more alienated from the others than he was at the beginning of the play and the truth has been exposed. The reason why these plays reach such a different conclusion stems from the language used by the villains, as well as the insecurities of those who are duped. Iago has used his skills of double entendre in order to deceive Othello, as well as exploit his insecurities. Furthermore, Othello is isolated from everyone else in the play and this proves to be dangerous as he has nobody to rely on for clarification of what is the truth and what is a lie. This is unlike Claudio who had friends who were convinced of Hero's innocence and are therefore able to set about proving it. What is clear however, that the motives of Iago and Don John consist purely of an innate envy of those in a position that is seemingly higher than their own. ?? ?? ?? ?? Sean Okundaye ...read more.