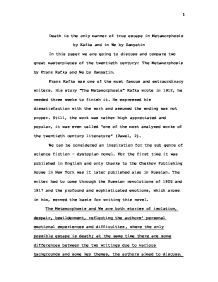 Death is the only manner of true escape in Metamorphosis

Death is the only manner of true escape in Metamorphosis by Kafka and in We by Zamyatin In this paper we are going to discuss and compare two great masterpieces of the twentieth century: The Metamorphosis by Franz Kafka and We by Zamyatin. Franz Kafka was one of the most famous and extraordinary writers. His story "The Metamorphosis" Kafka wrote in 1912, he needed three weeks to finish it. He expressed his dissatisfaction with the work and assumed the ending was not proper. Still, the work was rather high appreciated and popular, it was even called "one of the most analyzed works of the twentieth century literature" (Pawel, 2). We can be considered an inspiration for the sub genre of science fiction - dystopian novel. For the first time it was published in English and only thanks to the Chekhov Publishing House in New York was it later published also in Russian. The writer had to come through the Russian revolutions of 1905 and 1917 and the profound and sophisticated emotions, which arose in him, served the basis for writing this novel. The Metamorphosis and We are both stories of isolation, despair, bewilderment, reflecting the authors' personal emotional experiences and difficulties, where the only possible escape is death; at the same time there are some differences between the two writings due to various backgrounds and some key themes, the authors aimed to discuss. ...read more.

As contrast to The Metamorphosis, in We the central theme is related not to the problems of family, but to the society as whole. The impact of the totalitarian political structure, developed in Russia by Stalin is evident. The plot and the language of the novel contribute to creation of the absurd and full of nightmares world, where the oppressive and gloomy atmosphere is present. In order to underline the fact, that separate members of the society are needless and insignificant, that author doesn't use any names, only codes for all the humans, differentiating men and women only by vowels and consonants. The whole society received the name of the One State, a glass city, where the Benefactor is a head of it. In order to split humans from nature there is a huge Green Wall, which symbolizes the strict limits, set by the totalitarian government in Stalin's Russia. The narration tells about the period after the Two Hundred Years War, during which 0.2 of the whole population of the earth died. However there is no direct information about this war, there are only biblical metaphors, which point out the main aim of the war as "a rare substance called "bread" as the "Christians gladiated over it"-as in countries fighting conventional wars" (Zamyatin, 82). ...read more.

The theme of isolation is thus one of the most vivid and important in the story, the main hero experiences physical isolation as he was turned into a bug, and it only worsens the state of his emotional solitude. The echo of isolation is in We also, as there people are living in the world without friendship and without love. Somebody, who would risk to "taste" love will be deprived on his feeling through killing his memories. Finally both heroes of the narrations escape from their sufferings, from the worlds they were living in. Gregor Samsa dies and D-503 has to go through the procedure, which is very close to lobotomy, after which he will forget his rebellious ideas and his love and will return to the grey mass of others. The Metamorphosis and We explore several close themes, like for example place of an individual in the society, isolation, emotional strength and weakness of people, escape from reality and from cruelty of the surrounding world; at the same time the two narrations have different key points underlined by the authors, as Kafka was more concentrated on his family problems, whereas Zamyatin devoted his work to criticizing the political system in Russia. ...read more.