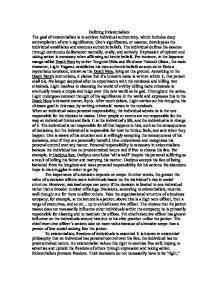 Defining Existentialism The goal of existentialists is to achieve individual authenticity, which includes deep contemplation of one's significance. One's significance, or essence, develops as the individual establishes and executes authentic beliefs. The individual defines his essence through continuous deliberation mentally, orally, and actively. Expression of opinion and taking action is necessary when affirming authentic beliefs. For instance, in the Japanese manga called Death Note by writer Tsugumi Ohba and illustrator Takeshi Obata , the main character, Light Yagami, establishes his own authentic beliefs as soon as he finds a mysterious notebook, known as the Death Note, lying on the ground. According to the Death Note's instructions, it claims that if a human's name is written within it, that person shall die. No longer skeptical after he experiments with the notebook and killing two criminals, Light resolves to cleansing the world of evil by killing more criminals to eventually create a utopia and reign over this new world as its god. Throughout the series, Light undergoes constant thought of his significance in the world and expresses this to the Death Note's demonic owner, Ryuk. ...read more.

Oedipus accepts his fate of being banished from the kingdom and takes personal responsibility for his actions. He abandons hope in his struggles in order to get by. The importance of a decision depends on scope. In other words, the greater the value of a decision affects more individuals based on the individual's rise in social structure. However, minimal scope can occur if the decision is limited to one individual rather than a broader number of beings. Decisions, according to existentialists, must be well-thought out for them to affect others. Take the organizational structure of a business company, for example, at the bottom is a janitor, above him is a high rank officer, then a range of executives, and so on... up to a chief executive officer. The choices that the janitor makes does not necessarily influence other individuals within the company; he is primarily responsible for cleaning and to maintain the offices. Yet chief executive officer has greater influence on the individuals around him due to his elite position unlike the janitor. ...read more.

To existentialists, situations that allow an extensive range of personal choice are primary. Since situations vary, existentialists are aware that some compromises are necessary to exercise their freedom. Existentialists try to avoid disruption of society while seeking to allow freedom of expression to everyone. Existentialist do not tolerate limited personal freedoms. Their intent is to express openly of their opinions against this restriction. One essential quality in an existentialist is being an active fighter for greater freedom. Hayden Panettiere, for instance, was involved in a violent confrontation with Japanese fishermen as she tried to disrupt their annual dolphin hunt in Taiji, Wakayama. She paddled out on a surfboard, with five other surfers in an attempt to reach a pod of dolphins to stop them being driven into a nearby cove and killed. Panettiere actively fought for the freedom of others, dolphins. In existentialism, death is accepted freely. In some cases, death seems like the most logical and ethical ultimate choice. For example, in Antigone, Antigone proudly accepts her death as she sees no wrong in honoring her unwept, "unburied" brother. She then kills herself, willing to make the "ultimate sacrifice" to protect the name of her wronged brother. ...read more.