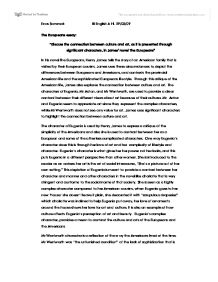 Discuss the connection between culture and art, as it is presented through significant characters, in James' novel The Europeans

The Europeans essay: "Discuss the connection between culture and art, as it is presented through significant characters, in James' novel The Europeans" In his novel The Europeans, Henry James tells the story of an American family that is visited by their European cousins. James uses these circumstances to depict the differences between Europeans and Americans, and contrasts the provincial American life and the sophisticated Europeans life style. Through this critique of the American life, James also explores the connection between culture and art. The characters of Eugenia, Mr Acton, and Mr Wentworth, are used to provide a clear contrast between their different views about art because of their cultures. Mr Acton and Eugenia seem to appreciate art since they represent the complex characters, while Mr Wentworth does not see any value for art. James uses significant characters to highlight the connection between culture and art. The character of Eugenia is used by Henry James to express a critique of the simplicity of the Americans and also she is used to contrast between her as a European and some of the other less complicated characters. ...read more.

It is also an example of how culture affects Eugenia's perception of art and beauty. Eugenia's complex character, provides a mean to contrast the culture and arts of the Europeans and the Americans Mr Wentworth character is a reflection of the way the Americans lived at the time. Mr Wentworth was "the unfurnished condition" of the lack of sophistication that is inherit in the Puritan way of life. Mr Wentworth's does not have an appreciation for art; he believes that "sitting for ones portrait is a form of idleness". These views are a reflection of the conservative life style and a reflection of the culture of the Americans. Another example of his views on art is as follows "The lord made...I don't think it is for man to make it over again", he doesn't view art in the same way as Felix or Mr Acton, because of the cultural difference between them. As a result of the strict life the Mr Wentworth has upheld, he doesn't have an appreciation for art the simple puritan culture that Mr Wentworth seems to have, influences the way he views and appreciates pieces of art. ...read more.

In the novel The Europeans, characters that have been around the world, and do not have the American culture, have higher levels of complexity and have multi layered and rich characters. The more sophisticated characters also have an appreciation of art that the provincial Americans do not. Eugenia is seen to appreciate art, and is herself an artist of a different type; she is an artist in her manner and the way she presented herself. Mr Acton is an American, however he has travelled the world, he has an appreciation for art like literature, and pictures. His experiences from around the world give Mr Acton this view on art; his culture influences his views of art. Mr Wentworth is an example of a puritan American, his culture lacks the complexities that the Europeans have, his simple culture makes him less appreciative of art. The different views that the characters have of art and the extent they appreciate it is a reflection of their culture and the richness of it. ?? ?? ?? ?? Enas Sammak IB English A HL 29/05/09 ...read more.