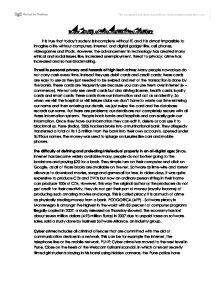 Drawbacks of ICT in a global society

Drawbacks of Information Technology It is true that today's society is incomplete without IT, and it is almost impossible to imagine a life without computers, internet, and digital gadget like, cell phones, videogames and IPods. However, the advancement in technology has created many ethical and social issues, like, increased unemployment, threat to privacy; crime has increased and so has blackmailing. Threat to personal privacy and hazards of high tech crime: Many people nowadays do not carry cash every time, instead they use debit cards and credit cards; these cards are easy to use as they just needed to be swiped and rest of the transaction is done by the banks. These cards are frequently use because you can use them over internet (e -commerce). We not only see credit cards but also driving license, health cards, loyalty cards and smart cards; these cards store our information and act as an identity. ...read more.

Software as lime-wire and torrent allows us to download movies, songs and games all for free. In olden days, it was quite expensive to produce CDs and DVDs but now an ordinary person sitting in their home can produce 100s of CDs. However, this way the original author or the producers do not get credit for their creativity, they do not get their part of money (royalty income) of producing such amazing movies and songs. This is called piracy; it is as much of crime as physically stealing money from a bank. PODGORICA (AFP) - Software piracy in Montenegro is amongst the highest in the world with 83 percent of computer programs illegally copied in 2007, a study released on Thursday showed. The economy has lost about seven million dollars (4.93 million Euros) in 2007 due to unpaid taxes on software sales, said a study done by Business Software Alliance, an industry group. ...read more.

In addition, these machines have proven to be less costly as they do not require breaks and wages. However, many older workers and semi-skilled workers have lost their jobs. In many countries, the unemployment rates have gone up rapidly. Gulf times: The GCC has increased unemployment up to 35 per cent, by reducing 300,000 jobs annually. Even though there is a lot of construction activities in process in UAE, Laborers are being sent back to their home countries, as they have been replaced by robots. The abuse of information as a tool of politics and economic power: Carabobo: The boy thought hacking the government sites would win him a job with a private telecommunications firm, according to the Associated Press and other wire services. The 17-year-old hacked into 23 state-sponsored sites, including those of the vice president's office, the National Guard, the state investigative services and the immigration office. A resident of the Carabobo state, the teen has been accused of unlawful access to and sabotage of a protected computer system, according to an AP report. ...read more.