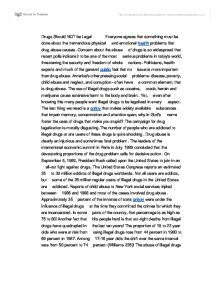 Drugs should not be legal

Drugs Should NOT be Legal ???Everyone agrees that something must be done about the tremendous physical ?and emotional health problems that drug abuse causes. Concern about the abuse ?of drugs is so widespread that recent polls indicate it to be one of the most ?serious problems in today's world, threatening the security and freedom of whole ?nations. Politicians, health experts and much of the general public feel that no ?issue is more important than drug abuse. America's other pressing social ?problems- disease, poverty, child abuse and neglect, and corruption- often have ?a common element; that is drug abuse. The use of illegal drugs such as cocaine, ?crack, heroin and marijuana cause extensive harm to the body and brain. Yet, ?even after knowing this many people want illegal drugs to be legalized in every ?aspect. The last thing we need is a policy that makes widely available ?substances that impair memory, concentration and attention span; why in God's ?name foster the uses of drugs that make you stupid? The campaign for drug ?legalization is morally disgusting.The number of people who are addicted to ?illegal drugs or are users of these drugs is quite shocking. Drug abuse is ?clearly an injurious and sometimes fatal problem. The leaders of the ?international economic summit in Paris in July 1989 concluded that the ?devastating proportions of the drug problem calls for decisive action. ...read more.

Thousands of heroin addicts ?die from overdoses each year. Heroin users are also at great risk of getting ?AIDS from the used of unclean needles. An estimated 60 percent of heroin addicts ?in New York City carry the virus, and needle sharing among addicts represents a ?major potential route for the spreading of the AIDS virus. According to a ?National Research Council report in 1989, nearly 70 percent of the heterosexual ?adults infected with the AIDS virus got the virus through an intravenous ?connection. The U.S. Public Health service predicted about a threefold increase ?in the cumulative total of reported cases of AIDS among addicts between 1989 and ?1991. When marijuana is smoked, about two thousand separate chemicals are ?produced, and many of the chemicals do not readily pass through the body. Some ?are stored in fatty tissues of the brain, lungs, and reproductive organs, where ?they remain for a long time. In a book titled, Drug Policy and Intellectuals, ?Stephen Thomas points out that one of the areas of great concern about the ?effect of smoking marijuana is the changes in the reproductive system (156). ?Heavy marijuana smoking reduces the level of testosterone, the principal male ?hormone. It may delay sexual maturation in teenage boys and may possible reduce ?sperm counts. The use of marijuana also has negative effects on the menstrual ?cycle of females. ...read more.

Dr. Stephen ?Cohen writes in his book, The Alcoholism Problem, "The harm that comes from ?Drug X (alcohol) is much greater than the harm from heroin from all respects" ?(151). Why should we believe that the legalization of illegal drugs will reduce ?the number of users of these drugs? Actually, it's quite logical these drugs ?would be easily available if legalized, and the number of users will increase ?because there won't be any breaking of laws that will end imprisonment. Illegal ?drugs should be kept illegal to secure the lives of those who are not addicts. ?The drug problem in our nation today is overwhelming, but can be controlled ?by numerous strategies. Reducing the supply of foreign that are causing serious ?problems in the Unites States is an important part on the war on drugs. Another ?way the drug problem could be controlled is if drug dealers were punished more ?severely. Whipping posts, the death penalty, and long jail sentences might be a ?start. The following suggestions were made at a meeting at a meeting of the ?Senate Committee Drugs and Crime held on April 4, 1989, to reduce the drug ?problem: put more police on the streets, both to arrest drug dealers and to give ?people a visible sense of hope; increase the number of prosecutors so that ?arrests are meaningful: increase prison capacity, perhaps by using army bases ?that are being phased out; increase drug education in schools; help the coast ?guard interdiction; and learn more about drugs from health authorities. ...read more.