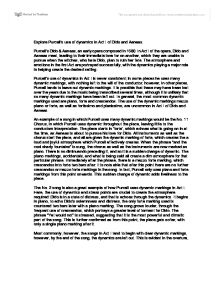 Dynamics in Dido and Aeneas

Explore Purcell's use of dynamics in Act I of Dido and Aeneas. Purcell's Dido & Aeneas, an early opera composed in 1680. In Act I of the opera, Dido and Aeneas meet, leading to their immediate love for on another, which they are unable to pursue when the witches, who hate Dido, plan to ruin her fate. The atmosphere and emotions in the first Act are portrayed successfully, with the dynamics playing a major role in helping create the desired setting. Purcell's use of dynamics in Act I is never consistent; in some pieces he uses many dynamic markings, with nothing left to the will of the conductor, however, in other pieces, Purcell tends to leave out dynamic markings. It is possible that these may have been lost over the years due to the music being transcribed several times, although it is unlikely that so many dynamic markings have been left out. In general, the most common dynamic markings used are piano, forte and crescendos. The use of the dynamic markings mezzo piano or forte, as well as fortissimo and pianissimo, are uncommon in Act I of Dido and Aeneas. ...read more.

This sudden change of dynamic adds liveliness to the piece. The No. 2 song is also a great example of how Purcell uses dynamic markings in Act I. Here, the use of dynamics and stress points are crucial to create the atmosphere required: Dido is in a state of distress, and that is echoes through the dynamics. It begins in piano, to echo Dido's solemnness and distress, the only forte marking used is countered two bars later with a piano marking. The song grows louder, through the frequent use of crescendos, which portrays a greater level of torment for Dido. The phrase "Yet would not" is stressed, suggesting that it is the most powerful and climatic part of the song. This is further confirmed as from this point, the piece gets softer, with only a single piano marking after it. Most commonly, however, the songs in Act I tend to begin with clear dynamic markings, however, by the end of the song, the dynamics are left out. This is evident in the overture, in which Section A has clear dynamic markings, beginning in piano with dramatic and sudden changes; including a sforzando, as well as a forte marking directly followed by a pianissimo. ...read more.

There is also accented notes with forte markings, which are immediately followed by diminuendos and a piano marking. This also adds to the effect created, and sets the scene for the sorceress to enter. Immediately before her entrance, however, Purcell uses the dynamic marking 'fpp' which is not used at any other time in the opera. This marks the entrance for the sorceress, which suggests the witches' sudden and dramatic nature. From this point on, however, there is no further dynamic markings, which allows the singer to alter dynamics as she chooses to. In summary, Purcell utilises a variety of methods to get the desired dynamics. As shown above, he is sometimes specific about how loud or soft he wants a particular piece, or section of a piece to be. However, in other sections and pieces, dynamics are left open to the interpretation of the conductors or performers. It is difficult to see any consistency in Purcell's use of dynamics, and since scores may have been slightly altered over time, we cannot be certain that the lack of dynamic markings were indeed intentional. It is evident however, that in Act I, Purcell incorporates both gradual and terraced dynamics, forte and piano, and, most obviously, dynamic markings and the lack of them. ...read more.