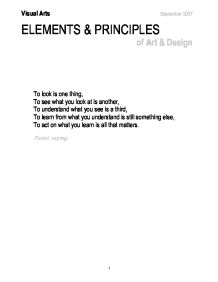 Visual Arts September 2007 ELEMENTS & PRINCIPLES of Art & Design To look is one thing, To see what you look at is another, To understand what you see is a third, To learn from what you understand is still something else, To act on what you learn is all that matters. Taoist saying THE ELEMENTS & PRINCIPLES OF ART & DESIGN Together the Elements and Principles form the basic structure (or composition) of any visual artifact, be it 2-D or 3-D, large or small, decorative or functional, abstract or representational, etc... There is some limitation to the number of both Elements and Principles, but the variety of work which may be produced from their combinations is practically infinite. To help understand the function of each, and the differences between them, it is useful to consider the art work itself as a recipe..... the Elements of Art & Design are like the ingredients of a recipe, and the Principles work as the method of the recipe. So, the idea determines the ingredients and the methods by which they are organized, and this eventually produces the art work....... Some artists and designers make conscious decisions on the use of Elements and Principles in their work, organizing them to create a unity. Others work intuitively, but are still, subconsciously, making decisions on the role of the Elements and Principles within their work. As students, you are necessarily learning the "language" of art and design and as such must understand each component before you can use them (or reject them) in an effective manner. Art / Design work can be produced without a full appreciation of this language, but to communicate effectively and efficiently, and to understand the work of other artists/designers, an understanding of the Elements and Principles of Art & Design is essential. Could you bake the cake without knowing of the ingredients or understanding the method? ...read more.

If the artist changes the viewpoint of the form then the shape will change. 6. FORM (Element) Form describes volume and mass, or the three-dimensional aspects of objects that take up space. Forms can ban should be viewed from many angles. When you hold a baseball, shoe, or small sculpture, you are aware of their curves, angles, indentations, extensions, and edges - their forms. MASS... the solid part of the form VOLUME... the space contained within or related to the mass. NATURAL FORMS are those that you can find in nature; rocks, trees, flowers, people, etc... ARCHITECTURAL FORMS are those designed by people (most likely architects) for various activities. Most are geometric forms but some architects use organic forms in their building designs. * GEOMETRIC FORMS are angular, squarish, cubistic, and straight-edged. * ORGANIC FORMS are rounded, flowing, undulating, and often bulbous. ABSTRACT FORMS simplify natural forms to their essential basic characteristics. NONOBJECTIVE FORMS do not represent any natural forms at all. REALISITC FORMS depict objects found in our natural world as they many actually appear. 7. SPACE (Element) Actual space is a three-dimensional (3-D) volume that can be empty or filled with objects. It has width, height, and depth. Space that appears three-dimensional in a painting is an illusion that creates a feeling of actual depth. Various techniques can be used to show such visual depth or space. SPACE may again be real or implied. ACTUAL or REAL SPACE is physical such as sculptures, architecture, and crafts. IMPLIED SPACE isn't real, but an illusion used by an artist to depict depth in a piece of 2-D artwork such as a painted or drawn landscape. SPACE and VOLUME are essentially the same, but one is around an object and one is related directly to it. For example... the space within a tea-cup and inside the handle is referred to as volume the space surrounding a building is space. ...read more.

The illusion of movement often refers to our previous experiences of real movement and the ways in which this has been captured, such as in photography. Elongated shapes cause our eyes to move along them. If there is a strong center of interest, our eyes will be drawn to it like a magnet. An artist may move our eyes through a painting by providing visual passages or linkage on dark or light values. Visual movement usually leads to a focal point. LINEAR MOVEMENT can be either direct (straight) or irregular (curvilinear). Our eyes follow lines and edges in sculpture, architecture, and paintings, as well as in nature. VISUAL MOVEMENT is when the artist moves our eyes into a painting. One way is to emphasis one-point perspective. We are drawn into the background from the foreground. Such visual movement can be very strong. 7. RHYTHM (Principle) Rhythm is the repetition of visual movement - colours, shapes, or lines. Variety is essential to keep rhythms exciting and active, and to avoid monotony. Movement and rhythm work together to create the visual equivalent of a musical beat. RHYTHM relies very much on organization of the elements of art where each one is carefully considered to give the desired effect. REGULAR RHYTHM is the repetition of elements that are the same or nearly the same in regular sequences. IRREGULAR RHYTHMS might repeat throughout a painting without any exact duplication. In nature, a row of evenly spaced trees or rock strata creates a regular rhythm. Plants spaced unevenly create irregular rhythms. STACCATO RHYTHMS are repetitions that are abrupt and that change frequently. They often seem to be short bursts of energy in a painting. PROGRESSIVE RHYTHMS are those which the elements change sizes as they progress or move across space. This is seen in looking at buildings or a fence in perspective. The windows and architectural elements are the same size but diminish as they progress into space. In architecture, rhythmic sequences of windows, columns, and other architectural details are used to unity large surfaces. ?? ?? ?? ?? 1 ...read more.